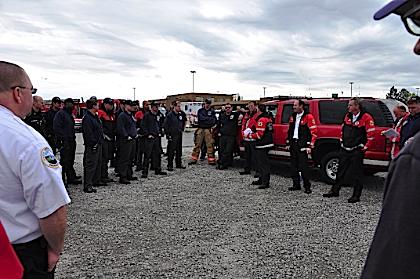 On Wednesday, May 11, 2011, the Port of Portland Fire Department sponsored a simulated emergency drill at the Portland International Airport. 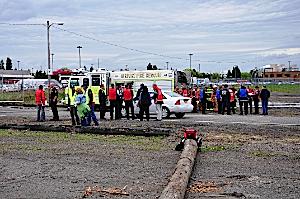 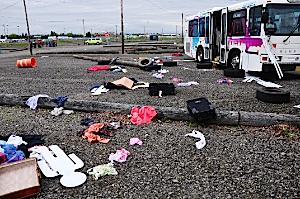 This was a Federal Aviation Administration (FAA) mandated drill and was not a real emergency. 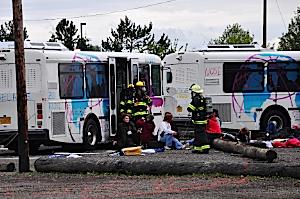 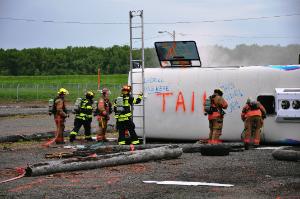 Once every three years, the FAA requires the Port of Portland to conduct a full-scale exercise to test the airport's and local fire agencies and private ambulance company’s ability to respond to a large-scale disaster. 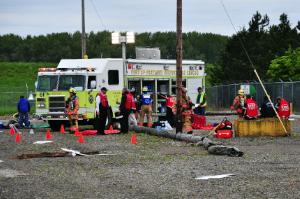 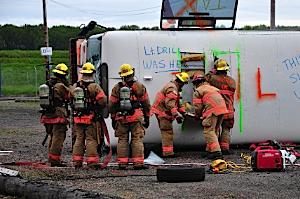 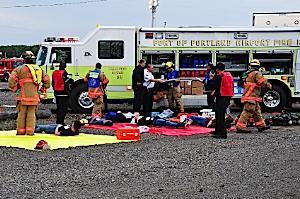 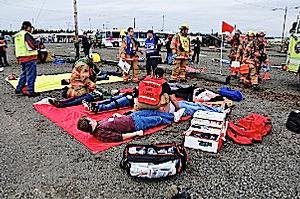 The emergency preparedness drill was stage inside and outside of the terminal, just off Airport Way. More than 300 participants including airport emergency responders, outside agencies, and community volunteers participated in the mock drill. 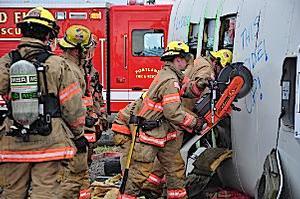 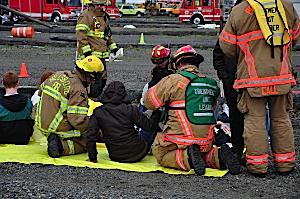 The drill simulation included an aircraft carrying passengers that departed a main runway, discontinued its climb into the air, and suffered a low impact crash coming to rest in a gravel lot off the end of the runway.

Additional photos of the simulated drill will be posted on Portland Fire & Rescue's Facebook.

My name is jennifer cook, i want to give almighty praise to Priest Salami who helped me get cured of my HIV/AID diseases, please help me thank this great man whom God has sent from heaven to save people’s life, this wonderful man also save the life of my friend who had HIV/AID just like I did, please thank this man for me, also if you have any type of problem or you need cure to any diseases you can also contact him to help you out, he is a wonderful man, his email is purenaturalhealer@gmail.com contact him now to help you too, you can also reach him on phone +2348143757229

I am so happy and filled with JOY. I am Gordon Rees by name and I work as a taxi driver. I love playing lottery but I have not won any huge sum except for a few Pounds. I decided to search online for help on how I can win very big because I have been playing lottery for the past 10 years. Then, I saw a post about Dr Amber who specializes in lottery spells. I contacted him and he told me everything about how to get the spell done for me and I agreed. He prepared a lottery spell for me and within 3 days, he gave me the numbers to play the lottery of which I did and after 2 days, I was told that I have won the sum of 1 million Pounds on the lottery game I played. I was surprised about it and I had to make sure I verified everything before believing that I was the winner of 1 million Pounds and ever since then, my life has changed and I am so happy living my dream life. If you need help to win your lottery game, WhatsApp Dr Amber on: +1 (406) 646-2222 or email: amberlottotemple@yahoo.com

I won $7,000,000(Seven Million Dollars) in the powerball lottery, I took an advice from someone who talked about this great spell caster called Priest Salami the person placed a testimony on a blog thanking Priest Salami on how he helped him win the lottery by sending him the winning number, i was curious and i thought it was all joke not until i contacted this spell caster to know for myself how this work cause i have spend a lot buying tickets and i have never win anything. I contacted him and he told me the necessary thing that need to be done and i did it and he told me to wait for 2days he will cast the spell on the winning numbers and send them to me to play and truly he gave me the winning numbers to play after 2days of working on the lucky numbers, Can you believe my name was the first among winners after playing. He told me (my son all I need you to do for me is make sure that you share this testimony to others so that they can also win the lottery and reduce poverty. So that is why I am sharing this testimony with everyone that if you want to win the lottery this is the way online tips can not help you, Priest Salami is the only answer to your problem of winning the lottery because this is a huge gift for me. Contact Priest Salami today and win the lottery like me Priest Salami email is purenaturalhealer@gmail.com or WhatsApp +2348143757229

Good day everybody, This is my testimony on how i won $4,200,201 million my name is William DeLuca, I want to use this opportunity to thank Great Priest Salami for helping me to win the lottery of $4,200,201 million dollars on Mega millions lottery ticket. I have been playing the lottery for the past 10 years now and I have never won. Ever since then I have not been able to win and I was so upset and I needed help to win the lottery. So I decided to go online and search for help, there i saw so many good testimonies about this man called Great Priest Salami of how he has cast lucky spell lotto for people to win the lottery. I contacted him also and told him I want to win a lottery, he cast a spell for me which I use and I played and won $4,200,201 million dollars. I am so grateful to this man, just in-case you also need him to help you win, you can contact him through his email: purenaturalhealer@gmail.com

I just want to say Thank You to everyone who supported me through the years. My name is Manuel Franco, New Berlin, Wisconsin. My story of how I won the Powerball lottery of $768.4M is a bit of a tale. I have been playing Powerball tickets for 6 years now since I turned 18. I bought my first ticket on my 18 birthday. I was feeling very lucky that day because I had contacted Dr. Odunga Michael to help me with the winning Powerball numbers. I really had that great great feeling that I looked at the camera wanting to wink at it. I only did a tiny part of it and trusted him. He gave me the numbers after I played a couple other tickets along with it for $10. I checked my ticket after the winnings came online and saw the numbers were correct including the Power play. I screamed for about 10 minutes because it felt like a dream. I had won $768.4M. You can check my winning testimony with the lottery officials just with my name search. Thank you Dr Michael. Well, his email is odungaspelltemple@gmail.com and you can also call or Whats-app him at +2348167159012 so you guys can contact him

FIX THE FOLLOWING PROBLEMS TO ALL ACROSS THE
GLOBE ON:

Contact HIM of any of these today at:
EMAIL: odungaspelltemple@gmail.com OR Call and WHATSAPP HIM +2348167159012

I AM SO HAPPY DR BOB , MY HUSBAND IS BACK. I completely trusted Dr. BOB totally from the time I spoke with him during the period my husband Left me after 7years of our marriage, He started the spell work on my husband and in just 24 hours husband is finally back to me again, yes he is back with all his hearts, Love, care, emotions and flowers and things are better now. I would have no hesitation to recommend this powerful spell caster to anybody who is in need of help. Please if anybody needs help. LOVE SPELL,LOTTERY,PREGNANCY SPELL, DIVORCE SPELL,STOP COURT CASE AND WIN ANY COURT PROBLEM,DEATH SPELL,BUSINESS SPELL AND MANY MORE. I Will Advice You To Contact Him Now Via Mail ( foreverspellcast49@gmail.com) Or Call/whatsapp ;+2349153314547

Good work deserves good recommendation, I have been trying to win the lottery for some months now but I have not been lucky enough to win a dime. In search of assistance on how I can at least be a winner of any lottery, I found out about Dr Ado who has been helpful with his winning numbers he gets through his spells to help people win the lottery. I got in touch with him to know how I can win the lottery and he told me everything I needed to know and do before the spell can be done for me and I acknowledge it. He prepared the spell for me and gave me the winning numbers to play and instructed me what to do as I played the jackpot lottery. I did as he instructed and after everything I decided to check if I was lucky enough to be among the winners, and I was. I screamed out in Joy immediately I saw my ticket numbers as the winner. I’m so grateful and appreciative to Dr Ado for helping me win. Contact him directly if you need his assistance on
WhatsApp On +27844284407
Email.... adoobisolutiontemple@gmail.com
Website Blog on https://adoobisolutionhome.blogspot.com/