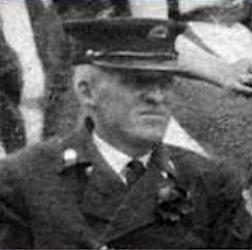 A house fire near the corner of Benton and Clackamas Streets was the location of the death of Lieutenant Adolph Wefel on June 1, 1923.  The fire had been extinguished by Engine 13’s crew and overhaul of the scene had begun.  A two story brick chimney, which had become unstable during the fire, toppled, landing on Wefel’s head.  Even with his protective clothing, he sustained fatal injuries.  Wefel’s crew, as well as Chief Lee Holden, tried to provide aid but he was considered dead at the scene.  He was transported to Good Samaritan Hospital but not removed from the ambulance.  Wefel was 38 years old at the time of his death. He had been hired on May 16, 1905 and served his entire career at Engine 13.  He was survived by his Wife and four children.