"It was a busy night for our fire crews," said Portland Fire & Rescue Public Information Officer Paul Corah. "At one point, we had one fire under control in NW Portland at the exact minute another fire broke out in NE Portland."

At 11:36 pm on June 1st, a 9-1-1 caller reported seeing flames in a home at 7406 SE 114th Avenue. Crews from SE Portland's Station 29 were onscene in four minutes. Firefighters isolated the source of the fire to the home's heating unit, and knocked down the fire. All occupants evacuated the home safely. The fire was brought under control at 11:51 pm. Damage to the home is currently estimated at $4,000.

At 1:37 am on June 2nd, fire crews from Downtown Portland's Station 1 were first onscene at 333 NW 6th Avenue, where a fire was reported on the second floor of the Westwind Hotel Apartments. Firefighters extended an aerial ladder to the apartment building's roof and determined that the fire had not extended beyond the second floor. Reports indicate that a fire broke out in a second floor bathroom of one apartment unit and was brought under control at 1:52 am. Fire investigators responded to the scene and have not yet released the fire's cause or loss valuation. 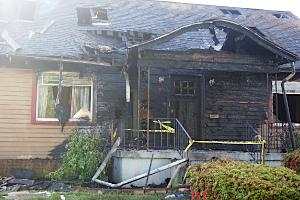 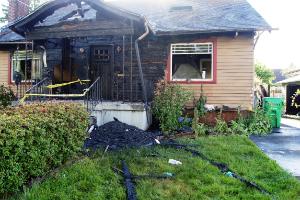 At 1:52 am, another call came in to 9-1-1 indicating that the front porch of a home at 4820 NE 34th Avenue was fully involved in flames. Upon arrival, firefighters from NE Portland's Station 14 encountered flames, which engulfed the front porch, and determined that the fire had spread to the attic and roof. Firefighters searched the home and found that it was not occupied at the time of the fire. The fire was brought under control at 2:50 am and fire crews remain onscene cleaning up and monitoring for hot spots. Fire investigators responded to the scene and have not yet released the fire's cause or loss valuation.

At 3:58 am, 9-1-1 callers reported that they saw flames coming through the ceiling of a home at 4034 SE 116th Avenue. The occupants quickly evacuated and firefighters from SE Portland's Station 7 arrived onscene to find active fire in the attic, with flames showing through the ceiling. Firefighters knocked down the fire and began pulling the ceiling apart to ensure that there was no fire in hidden spaces in the home. The fire was brought under control at 4:14 am. All occupants evacuated the home safely. Fire investigators responded to the scene and have not yet released the fire's cause or loss valuation.

"Portland Fire & Rescue has 162 firefighters at 30 fire stations on duty 24 hours a day throughout the City of Portland to protect citizens and property," said Corah. "When we have multiple fires at the same time, we can continue to provide equal fire protection throughout the city by strategically moving our fire crews around if needed."