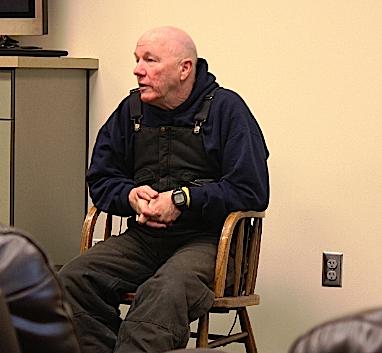 Bob Damron, a Firefighter with the Austin Fire Department, is driving across 49 U.S. states, visiting over 343 fire stations to convey an important message near and dear to his heart.

Just under five years ago at the young age of 55, Bob was diagnosed with Prostate Cancer.

Prostate cancer is the most common cancer in men and develops in the prostate, a gland in the male reproductive system. Most prostate cancers are slow growing; however, there are cases of aggressive prostate cancers. Luckily, Bob’s cancer cells did not metastasize or spread from the prostate to other parts of his body.

Bob acted quickly, bravely undergoing invasive robotic surgery.  During the surgery, mechanical arms that hold the scalpel and surgical instruments were controlled solely by his surgeon, who sat at an attached computer console and manipulates the arms with extremely precise joysticks.  Robotic technology such as that used during Bob’s surgery gives laparoscopic surgeons more precise control and magnified vision.

Bob began his rehab, and decided it would be his mission to visit with all firefighters in each of the 45 Austin Fire Department fire stations. At each station, Bob sat across the table and looked firefighters in the eye, sharing his situation with the goal of heightening their awareness about prostate cancer. He answered questions honestly and brutally, wanting his brother firefighters to know what their course of action could be and the resources that were available to each of them if any were confronted with prostate cancer.

After visiting all Austin fire stations, Bob decided to take his message across the United States. He began in New Mexico in March 2011, and his trip will cover approximately 29,000 miles over an eight to ten month period. 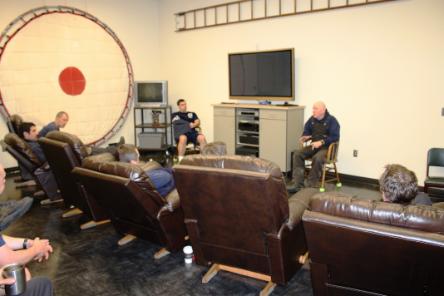 Bob arrived to Portland Fire & Rescue’s Station 1 on Friday, May 27, 2011.  He visited and ate lunch with Station 7’s crew, stopped by Station 13, and ended his visit with his third presentation of the day at Station 1.

Bob talked opening to Portland firefighters, letting them know that early prostate cancer usually causes no symptoms. Bob’s cancer was diagnosed during a routine checkup, and he encouraged the firefighters to be diligent with their health care and early detection, including annual doctor’s examinations, the prostate-specific antigen (PSA) blood test screenings, and self-checks.

He shared that primary risk factors for this type of cancer are age and family history.  Men who have first-degree family members with prostate cancer appear to have a heightened risk of getting the disease compared to men without prostate cancer in the family and prostate cancer is very uncommon in men younger than 45.

Bob ended his talked by showing a video produced by LIVESTRONG, an organization that Bob currently partners with that helped him to navigate his cancer journey. LIVESTRONG helps anyone affected by cancer including caregivers, family members and friends of someone diagnosed.  Learn more about the LIVESTRONG organization and services they provide at http://www.livestrong.org.

Firefighters here at Portland Fire feel fortunate to have met, spent time with, and received Bob’s message. As Bob travels around the United States, Portland firefighters will continue his message by “paying it forward” to the rest of our bureau, family members, and friends.