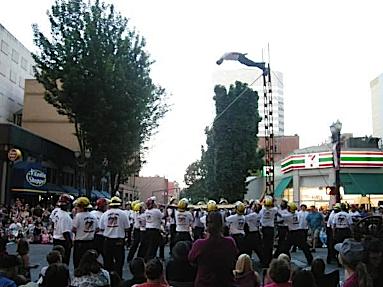 The 2011 Portland General Electric/SOLV Starlight Parade graced the streets of downtown Portland on Saturday, June 4th.  The parade drew more than 250,000 spectators and showcased diverse parade entries.  One of the most eye-catching entries was Portland Fire & Rescue’s Starlight Ladder Drill Team who entertained the crowd with death-defying ladder climbs, high flying acrobatics, and jumps into safety nets choreographic to music.