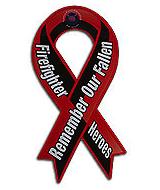 Thousands of firefighters are traveling to San Francisco to help honor two of their fallen brother firefighters who lost their lives at a two-alarm fire in a the Diamond Heights hillside home last week.

A memorial service for the fallen firefighters will be held at Saint Mary’s Cathedral at 12:30 p.m on Friday, June 10, 2011.  The service is expected to exceed several thousand people, including firefighters, police officers, elected officials and other community members.

The San Francisco Fire Department has confirmed that over 40 fire vehicles from other jurisdictions will participate in a procession after the funeral service from the cathedral to the burial at Holy Cross Cemetery in Colma.

A group of off-duty Portland Fire & Rescue Firefighters will be at the memorial service to pay their respects.

“Friday will be a day to celebrate and honor our fallen brothers, their families, and the other members of the San Francisco Fire Department,” Emergency Operations Chief Scott Fisher said.

Lieutenant Vincent Perez, 48, and Firefighter Paramedic Anthony Valerio, 53, suffered fatal injuries from last weeks’ 2nd alarm fire at 133 Berkeley Way. Perez was a member of the United States Marine Corps and had been with San Francisco Fire Department (SSFD) for 21 years. He died about an hour after firefighters hit the scene at 10:45 am. Valerio served at SSFD for 14 years and succumbed to his injuries just two days after battling the blaze.