The cause of the fire was determined to be a faulty household extension cord.  It was connected to a heat lamp for a pet. 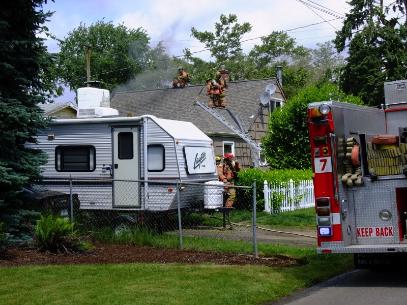 Portland Fire & Rescue (PF&R) has responded to a house fire at 1521 SE 89th Ave. When crews first arrived there was only a hint of light smoke coming from the eaves on one corner of the home.  Upon further investigation the fire was located in the attic space.  The fire was contained quickly and crews are currently working on clearing the smoke from the structure.  There were two dogs found in the home and they had not been exposed to the smoke.

Investigators are currently on scene to determine the cause of the fire.

Portland Fire & Rescue reminds community members to make sure they have smoke alarms in good working order in their homes and businesses.  Smoke alarms can save lives and early detection can prevent excessive fire damage.

Response include four engines, one truck, one investigator and two chiefs.