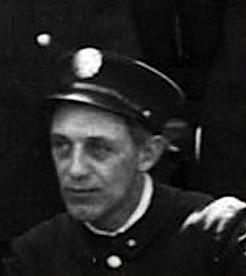 On June 15, 1921, Karl Gunster, Lieutenant of Engine 22, was on duty as his crew responded to the May Apartments at SW 14th and Taylor.  The fire, which would cause $75,000 in damage, began in the basement tool room and traveled up the dumb waiter to the top of the building and involving all four stories.  The investigation revealed the likely cause was spontaneous combustion of oily rags.  So rapid was the spread that arriving crews had to place ladders to rescue occupants from upstairs windows.  Gunster had entered the 3rd floor to try and locate the seat of the fire when he was overcome by smoke.  He was found lying on the floor by P.E. Clifford, an Engine 3 firefighter.  He fought the effects of the smoke as well but managed to drag Gunster to a window where fellow firefighters could assist.  In all, four other firefighters and three civilians were injured in the fire.

Gunster was 41 years old and had served Portland since December 22, 1913.  He was survived by his Wife.  In 1927, a fireboat would be named in his honor.  It would serve for many years after his death.

I know where this fire boat is.

Where is the fire boat?!

Wonderful to see this honoring of my mother's uncle. My mother, Nancy Sonneland, just died at age 97, and our sharing of family stories brought me to this site.