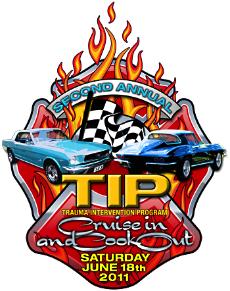 The Trauma Intervention Program NW (TIP NW) of Portland, Oregon and Vancouver, Washington will hold their Second Annual Cruise In and Cook Out event on Saturday, June 18, 2011.  The event will be held at Portland Fire & Rescue’s Training Center located at 4800 NE 122nd Avenue in Portland, Oregon and you are invited!

The event will feature over 150 classic cars, all makes and models, competing for awards. Live music will be provided by “The Touchables,” one of the best '60s pop culture bands in the area. Toping off the event will be raffle drawings and BBQ-style food cooked by members of the Portland Firefighters Association.  Click here to view the official invite!

If you have a good throwing arm, come by and try your aim at the dunk tank. Sitting in the dunk tank will be Lake Oswego Fire Chief Ed Wilson, PF&R Fire Chief John Klum, and Captains Mike Glenn and Steve Cottrell!  A small donation will earn the chance to launch them into the chilly dunk tank!

WHY AN ANNUAL CAR SHOW & COOK OUT FUNDRAISER?

The proceeds of the car show and cook out will directly benefit TIP NW. TIP is a national voluntary nonprofit organization dedicated to ensuring that those who are emotionally traumatized in emergency situations receive the assistance they need. To accomplish that goal, TIP works closely with local communities to establish emergency services volunteer programs. In these programs, well-trained citizen volunteers are called to emergency scenes to assist family members, witnesses, and other bystanders who the emergency system often must leave behind.

TIP volunteers are available on a 24-hour, 365-day basis to support family members after a death, crime victims, survivors of suicide, children left alone after a death or injury to their parents, senior citizens and anyone else referred to us by emergency responders. TIP NW is a chapter that serves Multnomah, Clark, and Clackamas Counties, including their newest expansion into Sandy, Oregon. TIP NW volunteers have served citizens in local communities for close to 20 years.

JOIN US AT THE CRUISE IN AND COOK OUT FUNDRAISING EVENT!

Owners who would like their cars included in the show must pre-register either online at http://www.tipnw.org/cruiseRegistration.php, by phone at (503) 823-3937, or via email at tipstaffnw@yahoo.com, with an entry fee of $20.00 per car. There is no admission fee for those interested in attending the fundraising event.

In 2009, TIP Volunteers responded close to 1,950 times to emergency calls, spending over 6,800 hours working face-to-face with clients. Are you interested in assisting citizens in the Portland and Vancouver areas that are in crisis?  Click here for further information or visit the official TIP NW website at http://www.tipnw.org.

How can I donate to TIP?