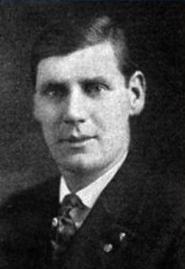 It all started on June 19, 1922 when a child’s ball was lost beneath a set of steps to a house.  A lit match used by two boys, ages 9 and 5, ignited the house at 387 Yamhill Street around 11:00 AM.  While the fire was rather easily extinguished, several inches of water gathered in the basement as a result.  A live electrical wire had fallen across the outside stairway to the basement and as James Baldwin, driver of Truck 1 descended.  It was noticed by other firefighters, who tried to warn Baldwin, but was too late.  He entangled his neck with the wire while standing in the water, resulting in his electrocution.  Firefighters on the scene worked to resuscitate him to no avail.  His care continued at the hospital but doctors were not able to save Baldwin.  Baldwin was 38 years old and survived by his Wife, a daughter from a prior marriage, and a soon-to-be-born child.  He was hired nearly five years prior, on October 22, 1917.