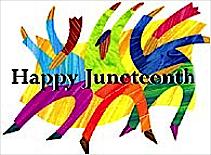 On Saturday, citizens in Portland had an opportunity to celebrate “Juneteenth,” the oldest nationally celebrated commemoration of the ending of slavery in the United States.

Firefighters at Station 14 showed their support by taking part in the “Freedom Trail Parade,” which began in front of the Wells Fargo Bank branch on Martin Luther King Jr. Blvd. and Jarrett Street, ending at Jefferson High School. The Grand Marshall for the parade was Bernie Foster, president of the Skanner Newsgroup, and long-time community leader.

Although President Abraham Lincoln signed the Emancipation Proclamation in September 1862, it was not until June 19, 1865 that freedom came to the last slaves in Texas. Juneteenth is now celebrated in 29 states, including Oregon, California and Michigan, and the District of Columbia. Some states, such as Alaska, Arkansas and New York consider it an official holiday, and close government offices in observance.