Firefighters from Portland Fire & Rescue (PF&R) don’t only fight fires and provide medical aid, they also understand the importance of being positive role models and involved in the communities they serve. To help their communities, firefighters from PF&R Stations 7 and 24 have become involved in the Refugee World Cup soccer tournament. There are 16 teams competing in this event that will be held on July 1st and 2nd at Delta Park. The teams include refugee youth ages 14 - 18 from Portland area high schools. They, their families, and the entire Portland community will have a unique opportunity through this event to come together to celebrate diversity and community through soccer. PF&R will be there to meet and greet the public, cheer on the kids who will be participating, and provide outreach about what PF&R does in the community. 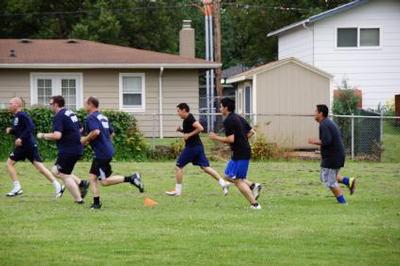 Last week we told you about firefighters from Station 7 who have become coaches for the David Douglas team. This week, we are following Station 24 firefighters who are coaching a team from Jefferson and Roosevelt High Schools. On Wednesday, we visited Station 24’s soccer practice where a team of 12 players scrimmaged with their four firefighter coaches. Though most of the firefighters don’t have a background in soccer, they unanimously stepped up to be good role models and mentors to their team. 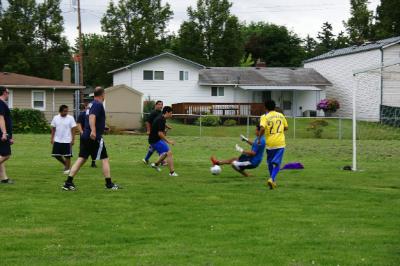 The team, made up of mostly Hispanic refugees, named themselves "Station 24" as a tribute to their coaches. Although this was only their third soccer practice, they all seemed to know exactly what they were doing - communicating, passing, and faking their coaches left and right, which resulted in coaches tripping and falling! 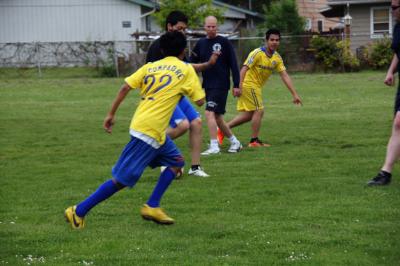 It was apparent by witnessing, that everyone was having a good time. “The neat thing is we’re all out here doing it together. Even the family and friends who sit off to the sidelines supporting their players gather together as a cheer squad. I feel like when we’re out here, we as coaches are learning more from our players than they do from us,” said Brandon Bacon coach from Station 24.

The World Cup Soccer Tournament kicks off July 1st at Delta Park where the two teams coached by Fire Stations 7 and 24 will face off against other teams. Be sure to come out and support our coaches and teams during these days as they are sure to advance through the matches with their skill and speed.