February is National Black History Month in the United States. To coincide with this national event, the City Council officially proclaimed February as Black History Month in the City of Portland. The proclamation honors the importance of black leaders through Oregon's history and recognizes the many ways African-Americans have enriched, transformed, and enlivened our community.

On April 22, 2011, Station 1 firefighters opened up their kitchen and welcomed in City of Portland employees who were preparing soul food for the Taste of Soul Luncheon and Marketplace Event. 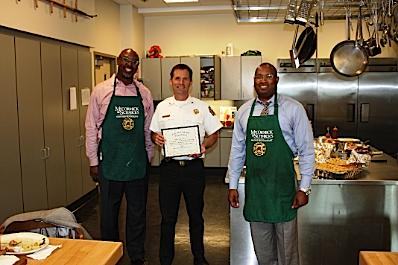 To thank the firefighters for their assistance and hospitality back in April, Jerrell Gaddis and his team traveled to Station 1 to cook a “thank you” lunch consisting of ribs, collard greens, macaroni and cheese, and red velvet cake. 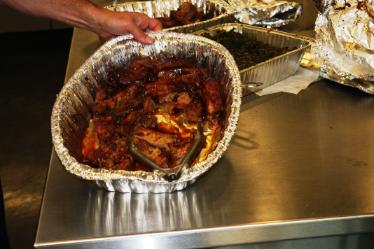 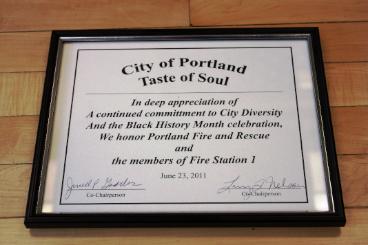 Thank much to Jerrell and his team of cooks!  Firefighters noted they are looking forward to the sweet potato pie next year!

It’s truly a nice and helpful piece of info. I am happy that you shared this useful info with us. Please stay us up to date like this.
http://www.dsnl.co.in/overview.html

Thanks in favor of sharing such a pleasant thinking, piece of writing
is fastidious, thats why i have read it completely
http://www.skumagic.com

Thanks again for the article.Really thank you! Really Cool.
http://straight2voicemail.com.au

I think this is one of the most significant information for me. And i’m glad reading your article. But wanna remark on some general things, The website style is great, the articles is really nice
http://americanmdcenter.com

Hi there to every , because I am really eager of reading
this weblog's post to be updated on a regular basis.
It consists of good information.
http://pmcc-india.com

I’m definitely enjoying the information.
I’m book-marking and will be tweeting this to my followers!
Superb blog and superb design and style.
http://thanishq.com

To a great degree significant post. This is my first time i visit here. I found such a substantial number of intriguing stuff in your blog especially its exchange. Really its exceptional article. Keep it up.
http://www.skumagic.com

I appreciate you spending some time and effort to put this short article together.
I once again find myself spending way too much time both reading
and leaving comments
https://www.kubermoverspacker.in

You’ve written nice post, I am gonna bookmark this page, thanks for info. I actually appreciate your own position and I will be sure to come back here.
http://americanmdcenter.com/services/porcelain-veneers

Pretty! This was a really wonderful post. Thank you for supplying this info.great write-up,thanks for sharing.
http://straight2voicemail.com.au

I’ll bookmark your web journal and take the bolsters additionally… I’m upbeat to discover such a large number of valuable information here in the post, we require work out more methods in such manner, a debt of gratitude is in order for sharing.
http://americanmdcenter.com/services/porcelain-veneers

I like the helpful information you supply to your articles.
I’ll bookmark your weblog and check again here regularly. I am quite certain I’ll be informed many new stuff
proper right here! Good luck for the next!
http://www.browline.com/it-management-London.html

This is useful information given in the article.
It was an enjoyable article
http://www.thecakeworld.in/products.php

great publish, very informative. I ponder why the other experts
of this sector don’t understand this. You must continue your writing.

I am confident, you’ve a great readers’ base already!
http://godamwale.com

It as hard to find experienced people on this subject, but you seem like you know what you are talking about! Thanks
http://electriciansnorthyork.com

It was great to know the hospitality on firefighter.

The Cake World is one of the best cake delivery in chennai
thecakeworld.in

Attractive section of content. I just stumbled upon your blog and in accession capital
to assert that I get in fact enjoyed account your blog posts.
Anyway I will be subscribing to your augment and even I achievement you access consistently quickly.
http://www.dsnl.co.in

My partner and I stumbled over here coming from
a different web address and thought I might check things out.
I like what I see so now i am following you. Look forward to looking at your web page for a second time.
http://electriciansnorthyork.com/electricians_Scarborough/index.html

It’s really awesome. I love it.very interesting and meaningful post. I got some very important views in your post which are very good and applicable for me. I just wish that I’ll see your another post very soon. I am waiting for that.
http://drfirasosman.com

Thanks on your marvelous posting! I quite
enjoyed reading it, you might be a great author.I will
make certain to bookmark your blog and will eventually come back in the foreseeable
future.
http://americanmdcenter.com

Thank you for all this great information about fire regulations Really your doing a great job
http://pmcc-india.com/why-pmcc/

We have a wide range of Warehouse Space, Logistic Centers, warehouse, Godown, Cold Storage for sale/rent in Delhi, Mumbai, Bhiwandi, Chennai, Hyderabad and all other

In the < a href=https://play.google.com/store/apps/details?id=com.CRE8.LudoChat>ludo Chat</a> version of “Catan,” you also build settlements, roads, cities, and knights.
Here, however, building doesn't mean placing wooden or plastic game pieces on a game board.

Thanks for sharing valuable information on the National Black History Month of portland. The job is done by the jerrell and his team was wonderful. <a href="https://www.agarwalpacker.com/">Agarwal packers and movers</a> helped multiple communities around the world to get the waste and other stuff move from one location to another.