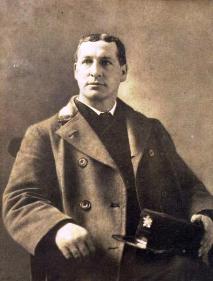 David Campbell was born in Pittsburgh, Pennsylvania in 1864. He came to Portland in 1878 and shortly afterward became a member of the volunteer fire department, being assigned to duty in Engine Company No. 4. He served the three years required to earn an exemption certificate. In 1892, Campbell re-entered the department as a member of Engine Com­pany No. 1, and was appointed as a foreman. In 1895, Campbell was appointed Fire Chief by Mayor Frank, and after serving fifteen months he was replaced by order of Mayor Pennoyer. He was again installed as chief by Mayor Mason in 1898, a position he filled until his untimely and tragic death.

A Progressive Leader
Chief Campbell spent nearly thirty years of his life as a fireman in the City of Portland; fourteen of those years were spent as department chief. In 1903, when a new city charter went into effect with civil service pro­visions, Campbell set about the task of re-organizing the half-pay department into a full-pay department. His ability as a leader was shown by the rapid success he attained in train­ing his men and acquiring cutting-edge equipment for the department.

By 1906, Portland’s first fireboat was operating with efforts underway to add more. Cisterns and hydrants were being upgraded annually. The alarm system was upgraded so that all circuits terminated at city hall central station and the city could route alarms through a private telephone system.

Campbell quickly came to be recognized as the leading fire chief of the Pa­cific Coast and among the foremost in the nation; he was unanimously elected by his peers as president of the Pacific Coast Fire Chiefs’ Association in 1906. In 1909, Campbell bought his first staff car. His advocacy led to the Fire Department’s transition from horse-drawn apparatus to American-LaFrance chemical and hose engines capable of traveling at 45 mph. As fire horses Jerry, Roachy and Colonel would find out, this was only the beginning.

On June 26, 1911, an alarm came in from E. Salmon and Water Street shortly after 7:45 a.m. An oil pump at the Union Oil distributing plant had thrown a spark, igniting gas accumulated in its motor pit. As he got into his automobile, Chief Campbell knew the fire would be hot. One of the first at the scene, he began directing arriving engine companies. By 8:30, every fire company in the city was on the line, an incredible jumble of men, machines and horses, slipping in inches of water as they tried to position themselves.

Realizing that the fire was out of control and their only hope for controlling it would come with an interior attack, Campbell borrowed a turnout coat from one of his men and disappeared into the building. At 8:39, there was an ominous rumble from the basement as accumulated gases approached their flashpoint. Bodies were hurtled across the street, tank heads flew 200 ft. in the air, the north wall was tossed across the street and the roof fell back to the ground. Campbell was last seen silhouetted against the flames, holding up his arms to brace against the falling roof.

By 10:15 a.m. when the fire was brought under control, word had passed from engine company to engine company that Chief Campbell had gone into the building before the explosion and had not come out. Rescue efforts began, and his body was found huddled in his borrowed turnout coat with the letters “F.D.” still visible on the buttons.

A Profound Loss for Portland
The passing of David Campbell signaled the end of an era. Campbell had successfully straddled the cusp between the old and the new in terms of manpower organization and technology.

After Campbell’s untimely death at the age of 47, the public came out in droves to mourn the hero they fondly knew as “Our Dave”. Over 150,000 citizens crowded into downtown Portland streets for Campbell’s funeral, which to this day is the largest number of people that have ever gathered for a similar occasion in Portland’s history.