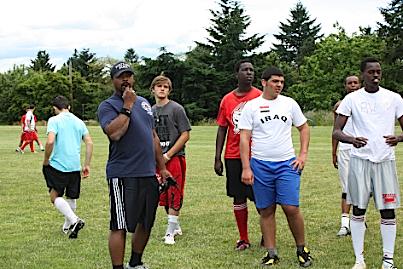 The firefighters from Station 7 are one of the busiest fire stations in the City of Portland, but it’s not just emergency calls that keep them on their toes. Along with firefighters from Portland Fire & Rescue’s (PF&R) Station 24, Station 7 added coaching soccer to their busy plates.

Previous blog entries highlighted the first days of practice for this team, made up of male refugee teens from David Douglas high school. Now—a week before the big tournament—we returned to see how this team was holding up, and the impact Station 7 had made on their young charges. 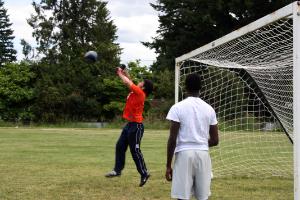 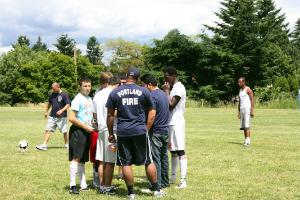 “It’s fun having firefighters here…they don’t really know anything,” says Ismail Gulaliyeu, a member of the “Eastside United” team. Ismail has been in Portland for six years, but was originally born in Turkey, where he’s been playing soccer “since I was born.” It’s true that many of the young men playing for “Eastside United” are more adept at soccer than their firefighting coaches. For today’s practice, former University of Portland soccer player and current Station 29 Firefighter Matt Smith stepped in to give some “official” coaching tips. Jared Borland, a traveling firefighter with PF&R, has also been stepping into practices. However, the team still describes Lieutenant David Barron, Station 7, as their “head coach.” 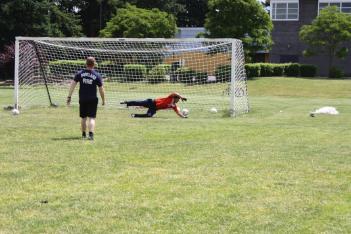 “This is a great thing for our organization,” says Barron, as he sneaks in a break after assigning his team to do laps around the David Douglas field. “I’d like to see more involvement in other sports and community activities.” All the firefighters of Station 7 agree that this has brought them closer. Coaching the young men hasn’t just been about soccer, it’s been about role-modeling, guidance, and ultimately being coached themselves. “Its’ reminding us of why we’re here…to help people,” David Barron continues. “They teach us about what it means to give back and make a difference.”

The culmination of these soccer practices, up to four times a week now that the end is only a week away, will be the Portland World Cup Soccer Tournament on Friday, July 1, 2011 and Saturday, July 2, 2011 at Delta Park.

Community members are invited to attend to support the stations that have donated many hours to the cause, and the dedicated young men who will be playing.