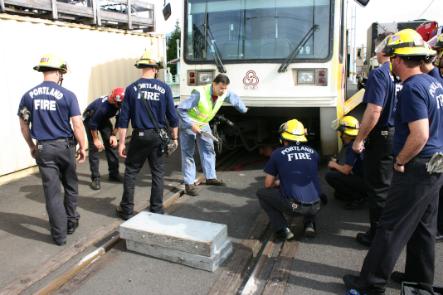 Over the next three days, firefighter crews from Portland Fire & Rescue’s Engine 11, 13, 19, and 31 and Truck 7, 13, and 25 will participated in a Metropolitan Area Express (MAX) lifting training drill.

The MAX is a light rail system in the Portland metropolitan area. It is operated by TriMet and currently has four lines: Blue, Green, Red and Yellow. In parts of the MAX system, particularly in central Portland and Hillsboro, MAX trains run on surface streets where citizens routinely cross. Except for on the Portland Transit Mall, trains run in reserved lanes closed to other motorized vehicles. On the Transit Mall, trains operate on the same lanes as TriMet buses (although MAX trains have traffic priority). Elsewhere, MAX runs within its own exclusive right-of-way, in street medians, alongside freeways, and on former freight railroad lines.

The training will help familiarize firefighters with MAX cars and the rail system as well as simulate a person being trapped under a MAX car. 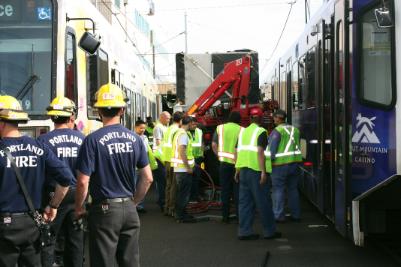 Engine 13, Engine 19, and Truck 13 were the first to drill at TriMets Ruby Junction Maintenance Facility. The companies worked closely together, using techniques with various jacks and cribbing to lift the MAX car and free the dummy under it. 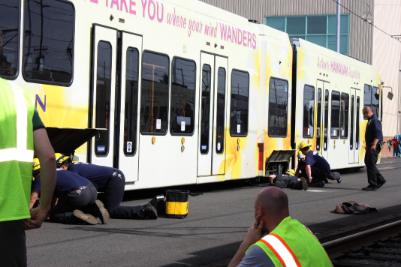 The companies also gained knowledge and learned about the various tools and used to lift the car. 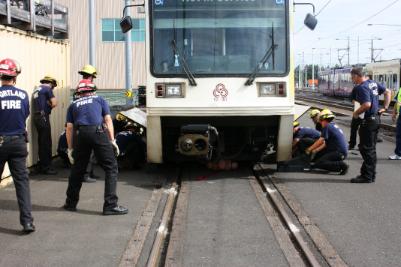 During the drill, an actual call for MAX engineers came through to help lift a train off a pedestrian who had been struck at 122nd Avenue and East Burnside. MAX engineers, firefighters, and police responded quickly to offer aid at the emergency incident. This teamwork showed just how critical proper training for these types of scenarios are, and that they can happen at any moment.

This article is loaded with useful information. You’ve really provoked my interest on many points written here.
http://americanmdcenter.com

It's difficult to find knowledgeable people in this particular topic, however, you sound like you know what you're talking about! Thanks
http://www.fresherswalkins.in

Enjoyed every bit of your blog.Thanks Again.
http://americanmdcenter.com

Wow, fantastic blog layout! How lengthy have you ever been blogging for?
you make running a blog glance easy
http://www.skumagic.com

I’m not that much of a online reader to be honest but your blogs really nice, keep it up! I’ll go ahead and bookmark your website to come back later. Many thanks
http://pmcc-india.com

I have recently started a site, the information you provide on this site has helped me tremendously. Thanks for all of your time & work.
http://electriciansnorthyork.com