Fire apparatus remain one of the most recognizable features of Portland Fire & Rescue (PF&R). Much time and effort is spent on the care and maintenance of these vehicles. In most cases, fire apparatus serve for about 25 years.  Some exceptions have shown great longevity.  One thing is certain – new or old, a shiny piece of fire equipment always draws public interest. 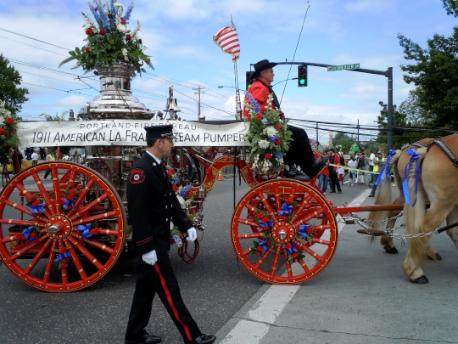 One such apparatus is PF&R’s 1911 American LaFrance Metropolitan 3rd class steamer. The steam fire engine was capable of pumping 600 gallons of water per minute using the steam driven water pump.  The beautiful boiler carried water, which was boiled by a fire built below it.  The resulting steam would turn the motor mechanism which would turn the water pump.  Unlike today where fire hydrants provide firefighting water, the olden days utilized cisterns.  Cisterns were brick lined pits in the street that would hold water for firefighting. 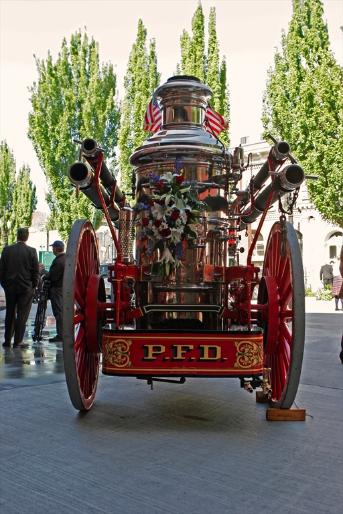 The Steamer is the last horse-drawn vehicle ever purchased by Portland Fire & Rescue. The first motorized vehicle was purchased in 1909, which ushered in the era of the motorized fire engine.  By 1920, all fire equipment would be gasoline powered.  This vehicle had been stored away and found in the 1970s.  It underwent several years of painstaking restoration by Al Carroci and Frank Maas before it’s unveiling in 1985.  It can be seen on display at PF&R’s Station 1 located at 55 SW Ash Street in downtown Portland.

Each year, Portland firefighters march behind the steamer in the Grand Floral Parade. The steamer is pulled by four Belgian horses provided by Chafin Farms located in Sweet Home, Oregon.

Portland Fire’s proud history began in 1853 and continues today.  The same pride and workmanship displayed in this beautiful vehicle serves the citizens of Portland each and every day.

Very informative ..i suggest this blog to my friends..Thank you for sharing
http://straight2voicemail.com.au