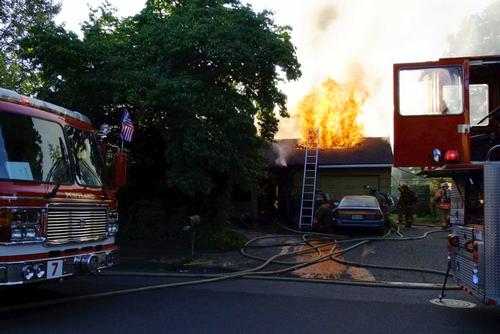 At 6:27 am, Portland Fire & Rescue was dispatched to reports of a residential fire at 1758 SE 112th Avenue.  Upon arrival firefighters from SE Portland's Station 7 encountered heavy black smoke and flames pouring from the front, side and roof of the residence.

"Flames were pouring out the front of this house and the front door had been blown off when Truck 7 pulled up to this fire," said Lieutenant David Barron. 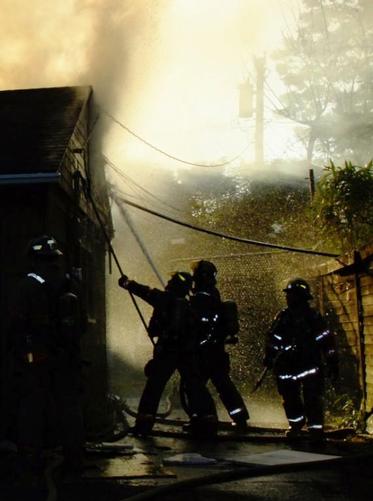 Firefighters began to aggressively attack the fire and search for occupants. They found four people trapped in the back yard of the home, where venting propane tanks and gas cans created a hazardous situation for firefighters and the tapped residents.  Firefighters safely evacuated all four individuals.  A total of five occupants were in the home at the time of the fire and no on was injured. 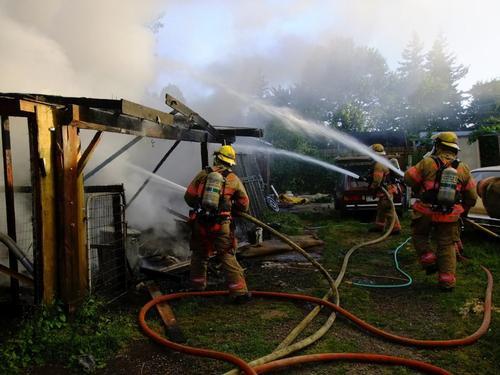 One occupant attempted to re-enter the residence while firefighters were actively fighting this fire and was detained by Portland Police.  The home was divided into four separate dwelling units.  Additionally, there was a shed that was being occupied as a dwelling unit in the back yard.  One dog was in the residence at the time of the fire and was deceased.  Two vehicles were also damaged in the fire.

Fire investigators are on scene working to determine the fire's cause.  The home is determined to be a complete loss valued at $148,000.  The Red Cross has been called in to assist the five adults find alternate living arrangements.

Fires can strike at any time of the day or night.  Portland Fire & Rescue urges all citizens to have a home fire escape plan and practice it regularly in case there is a fire at your home.