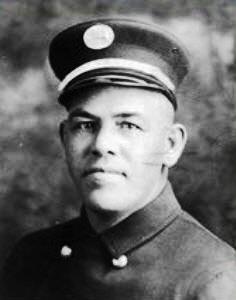 Captain Laisner had been working at the interior of a house fire.  Shortly after the fire was subdued, he announced to Hoseman Perry Demming that he thought he’d go inside and get a drink of water. He entered the house and apparently became dizzy because he seated himself in a chair.  A moment later, a witness saw him fall forward onto the floor and was found dead.  Company members attributed his death to heart disease.  Laisner was hired March 2, 1912 and was 45 years old at the time of his death. He was survived by his wife of one month.