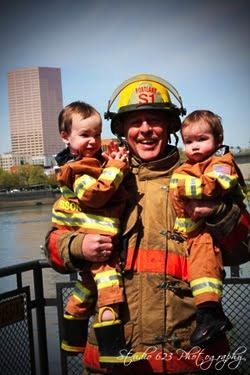 Portland Firefighter Christine Pezzulo at Station 5 has already begun readying herself for the climb by staying active and cross-training outside of work. Firefighter Christine notes that she enjoys the preparation and training, the friendly competition between firefighters, the personal challenge, and raising money for a great cause. Christine has made it her personal mission to raise as much money as she can for this cause every year to support a fellow brother firefighter and his grandsons. Wes Loucks, a retired Portland Fire & Rescue Firefighter of 32 years, and his wife Belinda founded the Portland Firefighter Stairclimb when both of their young grandsons were born with CF (picture of Loucks and grandsons to the right).  Louck’s grandsons, Carson and Brandon, fight for their lives on a daily basis, battling through daily breathing treatments and ridiculous amounts of medication. Read their story here.

FIREFIGHTERS – ARE YOU UP TO THE CHALLENGE?

Firefighters are welcome to register for the climb at http://www.portlandstairclimb.com/.

NOT CLIMBING BUT WANT TO DONATE?

Although the Portland Firefighter Stairclimb is open only to firefighters, the public can help through donations. Visit https://www.cff.org/Chapters/oregon/EventDonation/?idEvent=16370 to make a general donation for the event that will support the mission of the CF Foundation and help keep pace with current commitments to vital cystic fibrosis research and care.

You are also welcome to donate to Portland Firefighter Christine Pezzulo’s personal fundraising efforts for the 3rd Annual Firefighter Stairclimb at http://www.cff.org/LWC/dsp_donationPage.cfm?idEvent=16370&idUser=463001.

Are they planning on having a stairclimb this year 2012? Are the firefighters in bunker gear on the climb?