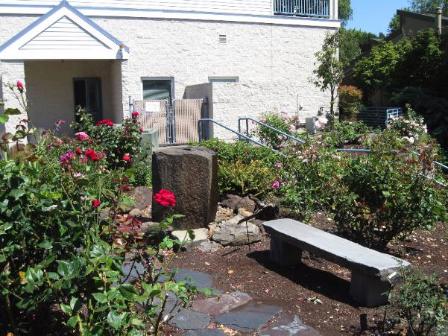 On Tuesday, June 28th, Portland Fire & Rescue (PF&R) firefighters were honored for something they had never been honored for before – their gardening skills. At the Royal Rosarians’ Rose Garden Contest Award Presentation, Station 17 Captain Scott and Firefighters Randy, Bruce, and Mark were honored with the Division 12 Commercial Winner Award from Section A.

Station 17 is located at 848 North Tomahawk Island Drive on beautiful Hayden Island and serves the Hayden Island, East Columbia, and Bridgeton Neighborhood Associations as well as the Rivergate Industrial District. Station 17 is one of three stations with marine firefighting and rescue capabilities. The station is staffed by an officer, harbor pilot, firefighter paramedic deckhand, and engineer on each shift. In addition to being trained as firefighters, the crew is trained to fight fires and save lives on the Columbia River. This station’s apparatus includes an engine with advanced life support, a fire boat, a rapid-response rescue boat and a utility response vehicle.

The station is well known for The Jim Canton Memorial Rose Garden, located at the west side of the station. It is named after a longtime island resident and local businessman who died suddenly in 1997. This rose garden is maintained by the crew as well as a local volunteer who tends the roses once a week. The garden is home to about 55 different rose bushes which won the firefighters the Rose Garden Award.

The Rose Garden Contest is a Portland tradition, stemming all the way back from 1932 when the 4-H committee and Portland Public Schools took a strong interest in children learning the acute skills of rose gardening, and adults from the community (“Rosarians”) acted as mentors for the children. Just as Portland Fire & Rescue serves the City of Portland, the Royal Rosarians work hard all year to help maintain Portland’s Rose Gardens and cultivate public interest in our city’s flower. Hopefully, this event will just be one of many times that Portland Firefighters are able to interact with the Rosarians, and take part in some of the many Portland traditions.