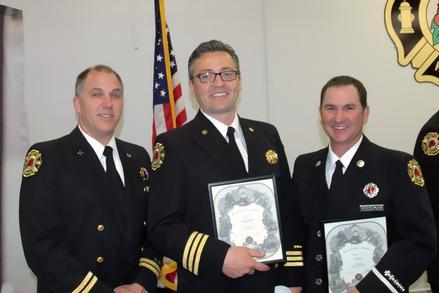 After a successful career at Portland Fire & Rescue, Chief Bancroft made the decision to return to school for a Bachelors of Science degree, a level of higher education he didn’t achieve before. As an 18 year old, Bancroft was burned out by his AP high school schedule, and began his career as a firefighter at age 20 after completing two years of community college.

His degree, in fire service administration, was administered by Eastern Oregon University through online courses. He had many reasons for wanting to go back to school, the primary of which was to set a good example for his sons (he has three—one will be starting Portland State in the fall, with plans to major in music). A degree also puts him on a faster track for the next stage of promotion. Though he has attained the level of deputy chief without a bachelor’s degree, three of the division chiefs have all received them. Education, at any age, puts you ahead of the game for employment.

Bancroft was surprised by the amount of homework his online classes gave him. Far from being credits all centered around firefighting (he has over 25 years experience in the field) he found himself taking socio-economics, history, and psychology classes. The required weekly papers, tests, and up to four hours of homework a night! Bancroft’s study tip: “Read right before bed. Your brain processes while you’re dreaming and it stays in your subconscious…which helps you retain knowledge.”

Despite the time commitment his college credits demanded of him, Bancroft has no regrets about his experience and encourages anyone to seek out a college degree no matter what stage of life they are in.  “Education is a life-long process,” says Bancroft.

Bancroft enhanced his writing skills, computer skills, and social networking skills through his class. It was time well spent, and a good investment in his future at Portland Fire & Rescue. “It was not as daunting a task as you would think to finish a degree.”