Recipes from Portland firefighters among the finalists in 'Firehouse BBQ' competition

When Lt. David Barron rattles off some of the dishes that firefighters at Portland's Station 7 eat regularly, he sounds a lot like Bubba from the movie "Forrest Gump," if Bubba had grown up raising chickens instead of shrimping.

Yes, the men and one woman of Station 7, a hazmat center in addition to being one of the busiest firehouses in the Pacific Northwest, eat a lot of chicken. Another favorite is Tater Tots. Same with grilled meat of any kind, the mention of which gets firefighters nodding eagerly.

But beyond having a soft spot for the traditional meat and potatoes, the firefighters are trying to eat healthy and locally. They buy some of their food from farmers markets and grow some herbs and tomatoes in a small plot of land next to the station at 1500 S.E. 122nd Ave., said Grant Coffey, the hazmat team coordinator.

The winning firehouse will receive a $10,000 prize, and if Station 7 takes the competition, the firefighters will donate the money to Responder Life, an organization that provides support for the families of first responders. Voting is online at americasbestfirehousebbq.com and the contest ends July 29. The fact that a firehouse would be involved in a food competition probably shouldn't be all that surprising.

Portland Fire & Rescue’s Station 7 was selected as one of the ten finalists in America's Best Firehouse BBQ Cook-Off presented by Tree Top. The winning firehousewill receive $10,000, and if Station 7 takes the prize, the firefighters will donate the money to Responder Life, an organization that provides support for the families of first responders. 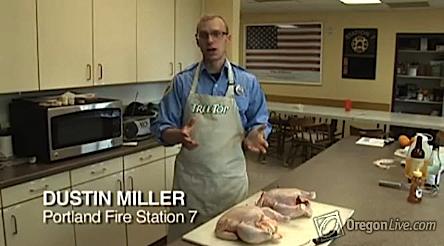 Over the years, fire stations all over the country have built a reputation of placing an emphasis on food and good cooking. That's because meals at firehouses serve several purposes. One, of course, is to supply the firefighters the energy to last them through their 24-hour shifts. The food they eat is just one aspect of the firefighters' efforts to stay healthy, which reduces the likelihood of injuries and death in the risk-filled profession.

"The guys work hard, they play hard," Coffey said. "They're in this job because they want to serve. They're energetic about it, and it takes calories."

Meals are also a time when firefighters blow off steam and bond. They are one of the few times during the day when everyone, including the chief, is together. The atmosphere at meals is festive, Barron said, and several firefighters said the mealtimes are like eating with family.

"This is a really active but pretty nasty area," said Coffey, describing the part of the city Station 7 serves. "There are a lot of knifings and shootings, plus traffic accidents and fires. You got to shake it off in some way. We try to have a fun atmosphere around meals."

Meals are not just for fun, though. After responding to a fatal incident involving a MAX train recently, for example, the firefighters came together around the table to discuss how the call could have gone more efficiently, Barron said. And calls frequently interrupt meals.

That also dictates what kind of meals the firefighters can whip up. Meal preparation can be halted immediately for emergencies, so the best food is the type that reheats well, Coffey said.

Those limitations do not stop Station 7 from encouraging eating healthy, or at least trying to. There is a salad bar at most dinners and a bowl stacked full of fruit on the central counter.

What is on the menu each day is ultimately up to the cooks. The cooks are firefighters who volunteer for the job, but they get out of dish duty and paying the daily $10 stipend for food. There are regular meals, such as a Sunday breakfast that medic and firefighter Jay Fink said "can't be beat."

But some of the cooks are a bit more adventurous.

"I can't even pronounce some of the stuff that Dusty makes," Barron said, referring to firefighter Dustin Miller.

But he knows it will be good.