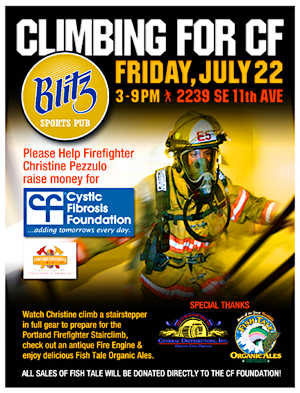 Portland Firefighter Christine Pezzulo at Station 5 has already begun readying herself for the climb by staying active and cross-training outside of work. Christine has made it her personal mission to raise as much money as she can for this cause every year to support a fellow brother firefighter and his grandsons who both were born with CF.

This afternoon, Firefighter Christine will be “actively” fundraising to raise awareness and donations for cystic fibrosis research.

All are welcome to stop by Blitz Ladd located at 2239 SE 11th Avenue from 3:00 pm to 9:00 pm to show your support for Christine who will be hitting a revolving stair-stepper in full "combat gear."

By purchasing a pint of Fish Tale Ale and buying into the 50-50 raffle, you can help Christine reach her goal of raising $5,000.00 for CF.