With food prices rising, and the value of a dollar shrinking, everyone feels an economic pinch when grocery shopping — including Portland’s firefighters.

“Sometimes people misunderstand, when they see us shopping in the grocery store,” says Portland Fire & Rescue Station 20 Firefighter Stephen Scott. “We’re not given money for food; each person on a shift puts $10 into the day's food fund. And, with a $40 budget, it’s getting more and more difficult to buy three meals worth of food for the four us on our 24-hour shift.”

So, they, like many Portlanders, planted a vegetable garden! Theirs is behind PF&R Station 20, on S.E. Bybee Boulevard just west of the Bybee Bridge. Westmoreland Manor owns the land they farm, Scott explains. 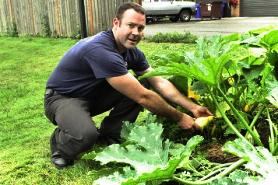 “They’ve allowed us to do this for several years; we really appreciate it. With the cost of food going up at an alarming rate, we’ve expanded our garden this year. It’s healthy, it’s sustainable, it has no impact on the environment, and it helps us in our pocketbooks,” Scott observes (pictured on the right).

“We’re even trying watermelon this year,” smiles Scott as he picks a squash that will be incorporated into the evening’s dinner.

Next time you see firefighters shopping at your local grocery store, know that they are paying for their food out of their own pockets, and in the case of Westmoreland’s Station 20, they’re growing some of it nearby.