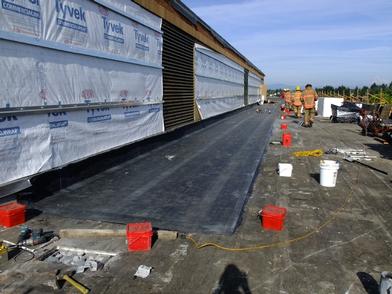 At 4:45 pm Portland Firefighters were dispatched to 5050 NE Hoyt - Providence Professional Plaza - after receiving reports that individuals in the medical office building were experiencing breathing problems and eye irritation. Initial reports indicated that there was an ammonia smell in the building.

According to Portland Fire & Rescue Lieutenant Jeromy Paul, "There was an overwhelming smell in the building - like model airplane glue." Construction workers indicated they were working on the building's roof at the time people began experiencing symptoms. Workers were laying a rubber membrane on the roof as part of a roofing project.

HazMat crews gained access to the roof and isolated the product that was causing the problem. Upon further evaluation of the material, firefighters determined that a strong glue being used in the roofing project produced vapors that were sucked into the building's ventilation system and circulated into the air inside the building. 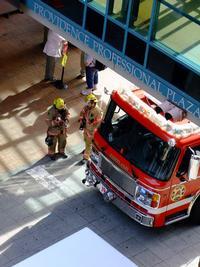 Because of quick thinking and well-trained staff, approximately 150 people were safely evacuated in a short period of time from the building, which houses medical and administrative offices. Five people reported symptoms of eye irritation and breathing problems. One individual who experienced breathing problems was transported across the street to Providence Portland Medical Center for evaluation.

Staff indicated that the medical building will be closed through the weekend and thoroughly ventilated. Providence Professional Plaza will re-open for business on Monday morning.