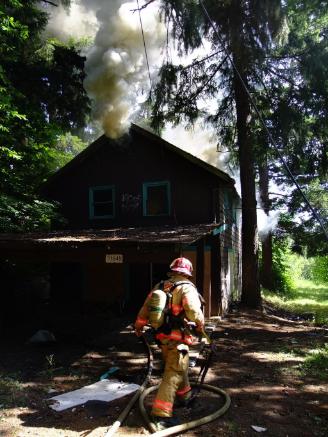 Portland Fire & Rescue responded to reports of a house on fire at 10848 S.E. Salmon St. at 3:51 pm.  The house on fire, which was located at the end of a dirt road, was one of two boarded up homes.  Neighbors reported that there has been an increase in transient activity in and around these homes recently.  Upon arrival, firefighters made attempts to knock down the flames, but were pushed back by heavy fire in the home's attic. 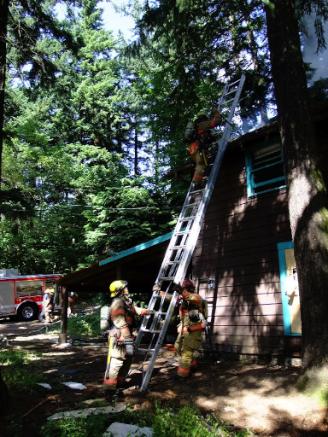 "The structure was boarded and found to be vacant, so firefighters went on a defensive attack which minimized risk of injury," said Portland Fire & Rescue Battalion Chief Tom Williams.  Firefighters had a handle on the blaze approximately ten minutes after arrival.  Damages to the home are estimated at $10,000 and fire investigators are on scene working to determine the fire's cause.

"Firefighters are encountering more and more calls involving homes that are vacant and boarded, especially in East Portland," said Public Information Officer Paul Corah.  "Because of this, our fire crews are keeping an extra close watch over abandoned homes that may be at risk for becoming attractive nuisances."