Two men were attempting to rappel down the east side of Rocky Butte around 8:00pm Wednesday night when one of the climbers experienced fatigue and could not get back up to the top.  The climber on top lowered his climbing partner down to a ledge about 50' from the top of the cliff.

Once it became apparent that the individual could not climb up or down on his own, and with darkness setting in, one man went to get help since neither was carrying a cell phone or wearing helmet lights. 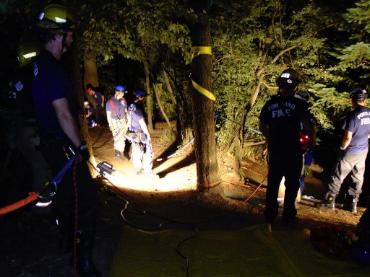 Around 9:30pm, Portland firefighters from Downtown Portland Fire Station 1 responded to the scene and determined that because of the darkness, it was unsafe to guide the climber up or down on his own climbing abilities. 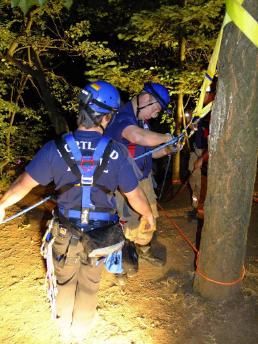 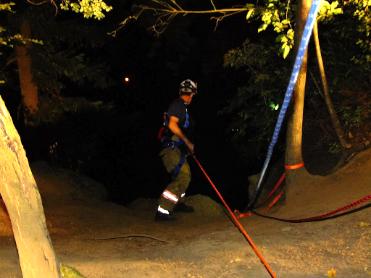 "This rescue took place in the exact location where a 16-year-old boy died two nights ago," said Portland Fire & Rescue Public Information Officer Paul Corah.  "This area is extremely dangerous and Portland Fire urges the community to use extreme caution."

Reports indicate that the climbers' young children were playing near the climbing spot while the individuals were climbing.  This is not a place for children as there is no fence, no roped off area, and no signage to indicate how dangerous this area has been, especially in recent months.  "People could literally walk down the unmarked path and over the edge of the cliff if they are not careful," said Corah.

At around 11:30pm, both climbers and their children were safely reunited following the rescue.  The climbers indicated that had not heard about the tragedy two nights ago when a 16 year-old boy fell off the butte at that location and later died from his injuries.

why is this location not marked, or blocked off?
clearly its hazardous.

I agree with Annie. Shouldn't an area that dangerous where people have died at least have a fence or signage to warn people in the area of the cliff?

Portland Fire & Rescue is currently working on signage on Rocky Butte with ODOT. Thank you for your comments!