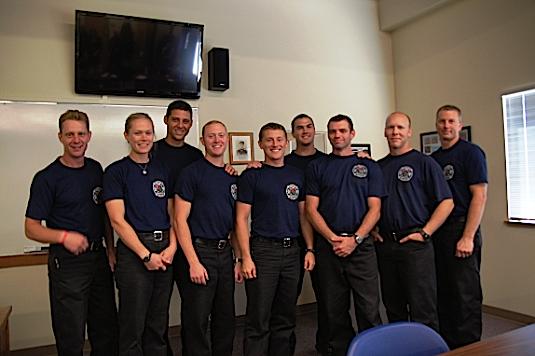 At a barbeque at the Training Academy on August 17, 2011, two firefighter academy classes came together to celebrate the upcoming graduation of the older class. 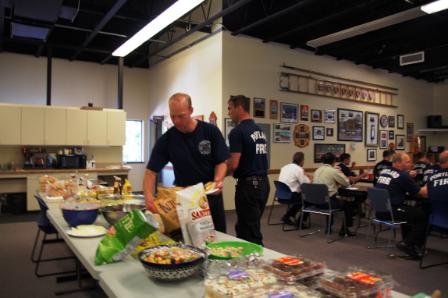 Gretchen Pedersen, 34, didn’t grow up with dreams of being a firefighter. In fact, she didn’t even sign herself up for her own Firefighter’s Test. In Hillsboro, she was a high school teacher and women’s basketball coach for four years, but found that the work wasn’t satisfying her and she was looking for a career change. When a friend signed up for the PF&R Firefighter Test, Gretchen decided to do so as well.

Gretchen and the eight other recruits in her class will be graduating from Training at the beginning of next month and moving onto the next step in their firefighting careers. For Gretchen, this means Engine 2. Graduation will be the culmination of all the hard work that the nine of them have been putting in since March of this year—working 7:00 to 17:00 Monday through Thursday, where they have been pushed to their limits physically and mentally.

Unbeknownst to many outsiders, the Firefighter’s Test isn’t the last exam in a recruit’s repertoire. In fact, much of training is made up of standard testing of knowledge. Gretchen’s school background certainly gave her a leg up in this area, but her entire recruit class stunned their training officers and trainers with their high test scores, getting a class average of 90%. Even former Training & Safety Division Chief John Nohr (now the Emergency Operations Division Chief) was surprised and pleased when this was announced—he even questioned if it included the driving score (it did).

Gretchen also doled out advice to future recruit classes—if you want to get a head start on physically preparing your body (and you definitely should) high intensity work outs are best. She wishes she had done more with weights, since upper body strength for women is a bit harder to come by, but vital. She describes training as an “eye opening experience” that requires you to think on your toes. Not dissimilar from the basketball team she coached, team work is a big part of it, and everyone from her recruit class feels like a family.

Portland Fire & Rescue joins the Training Academy in congratulating the successes of Recruit Class 11-01, and wishing them well in their firefighting careers.

I think it's great that the recruits are commended in an article like this. I have a feeling that the general public has no idea what is involved in becoming a firefighter. It's not until you personally know someone going through the academy that you become aware of how demanding the training is. I've gained even more respect of firefighters knowing what I do now about what's involved in order to become a firefighter. I'm pleased to hear this class has made PF&R proud! Way to go Recruit Class 11-01!