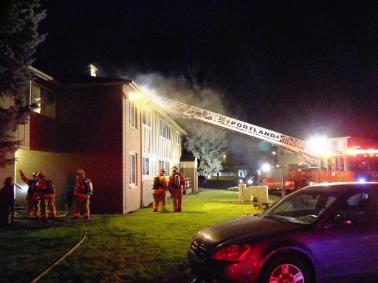 Portland firefighters responded to an apartment fire at NE Broadway late last night. Engine 19 arrived on scene at the Ellington apartments at 6524 NE Broadway at 11:06 PM to find heavy fire escaping from the upper story back windows of the unit. Crews conducted an aggressive fire attack to keep the fire from spreading to surrounding apartments. All occupants were able to escape safely, and no civilians or firefighters sustained any injuries. 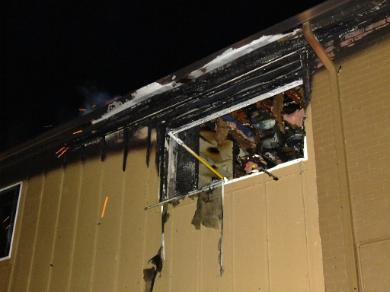 "Nighttime is the most dangerous time for fire because people are sleeping, and firefighters have a heightened awareness that in the night our main priority is getting everybody out of the dwelling. We're very happy that everybody was able to escape safely," PIO Paul Corah said.

The apartment below the unit where the fire was found sustained water damage and the apartments on either side had smoke damage. Fire crews cleared the scene at 1:37 AM.

Fire investigators were called to the scene to determine the cause of the fire, which is unknown at this time. They estimate the damage to the apartment building at $50,000.