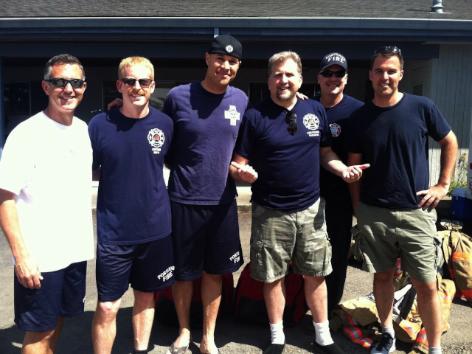 Off-duty Portland Fire & Rescue Fire Captains John and Jim, Lieutenants Chris, Damon, and Rich, and Fire Investigator Rob were cast last week to play firefighters in an episode of the NBC TV show "Grimm" that is shooting in Portland this summer.

A casting call request was sent out to Portland Firefighters in an email prior to the start of shooting. 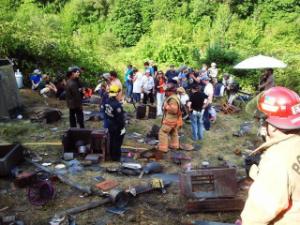 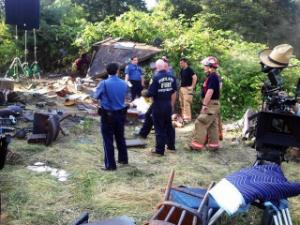 The day long shoot was set in Sherwood, Oregon. The scene included a house that had exploded with debris everywhere. The two main actors played detectives and interviewed the home owners.  The Portland Firefighters were in the background of the shoot, picking up and pulling hose, shifting through debris, recovering personal effects, and taking photos of the scene. 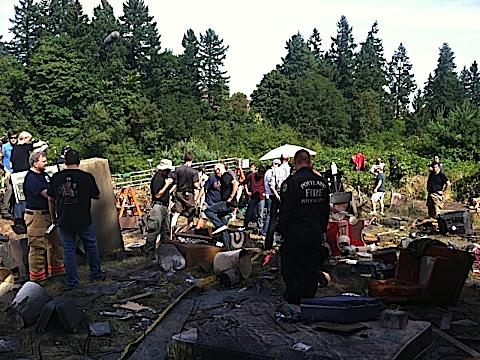 “Grimm” is a new drama series inspired by the classic Grimm’s Fairy Tales and is a production of Universal Media Studios and Hazy Mills Productions. Sean Hayes and Todd Milliner (“Hot in Cleveland”) serve as executive producers, Jim Kouf (“National Treasure,” “Angel”) and David Greenwalt (“Buffy the Vampire Slayer,” “Angel”) are the creators/executive producers and Marc Buckland (“My Name Is Earl”) is the director.

The pilot episode of “Grimm” will be on October 21, 2011.  The first episode that includes the Portland Firefighters will air shortly after. Stay tuned!

Way to go John. I'm showing off your picture to everyone.