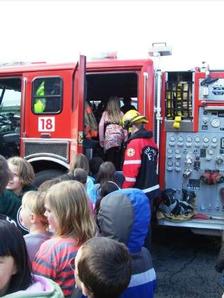 Captain John and Firefighters Gerald, Jerome, and Ryan from Portland Fire & Rescue’s Station 18 were onsite at to support the efforts of the project and offer the students friendly fire safety reminders. Firefighters from Station 18 enjoy participating in engagement events such as these because of their strong sense of community.  Captain John said it best by noting, “Plain and simple - it’s important to us to be involved in the communities we serve.”

If you are interested in donating school supplies and new clothing or volunteering your time to the Grauer Back-to-School Project, contact Judy Willis at St. Luke Lutheran Church at judy@stlukechurch.com.

Portland Fire & Rescue’s (PF&R) Station 18 has been serving far southwest Portland and Multnomah Village since 1951.  The station has been located at 8720 SW 30th Avenue since 1961. Station 18 is a proud part of the rich history of the City of Portland and PF&R. In 1913, Engine 18 was the first gasoline-powered PF&R fire engine.

Today, Engine 18 is a 1991 Western States pumper with a 500 gallon booster tank and a 1500 GPM pump.  The engine and crew is often summoned to Interstate 5 and the Terwilliger curves, and is specifically equipped with foam to fight vehicle fires.  Station 18’s firefighters are trained in vehicle extrication and carry Jaws of Life rescue tool on the engine. Engine 18 also serves as part of PF&R’s Wildland Strike Team, responding to several Oregon wildland incidents in the recent years.

Also housed alongside Engine 18 at Station 18 is Heavy Squad 18 and Brush Unit 18.

The future for Station 18 is exciting. To meet the demands of the growing city, Station 18 was recently relocated to a vacant garden center on SW Barbur Blvd. This temporary move will allow for the station to be seismically upgraded and remodeled with the use of General Obligation bond money. Improvements will include again, a seismic upgrade to bring the station up to current safety standards, as well as a remodeled interior and bay expansion to provide additional space for fire operations. The interum Station 18 is located within blocks of the original station and emergency response times will not be affected. All structural modifications will maintain the integrity of the building's historical character. The estimated completion date for the remodel is January 2012.