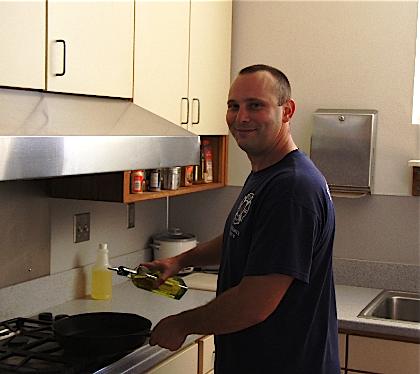 Portland firefighter Cody Trestrail began his firefighting career as many do - by becoming a volunteer firefighter.  Trestrail, age 33, grew up in Battleground, Washington where he was a volunteer firefighter for Fire District 11 that serves Battleground and its residents.  He loved firefighting so much that he aspired to become a firefighter in America's largest city - New York City.  With a hope and a dream spurring them on, Trestrail and a friend boarded a plane in 1998 to New York to take the New York Fire Department test.  Unknown to Cody, there were 30,000 people also taking the exam alongside him.  Much to his surprise, Cody scored a 99% on the written exam.  He felt like his chances of being hired on were good, but there was a hitch.  To get hired with that score he need another five points on the exam.  The only way he could get the points was to move to and live in New York for a year before he could get the added points to get hired.  So he packed his belongings into a U-Haul truck and headed to New York.  While waiting to get hired, Cody worked for a local ambulance company running emergency medical calls in New York, where he learned a lot and got his feet wait while he waited.

Cody finally got the call he had dreamed about - a call saying he was hired by FDNY.  It was 1999 and after months of long training days Cody was ready to head into the fire stations.  His first assignment was 119 Truck and 211 Engine.  Cody moved to Staten Island where most of the City workers lived, extending his commute to an hour each way.  It was expensive to live there since the starting salary for a New York firefighter was around $25,000 a year.  "I loved working a six person truck in Brooklyn," Trestrail recalls.  "It was a busy place and there was lots going on all the time."

New York firefighters work a 40 hour week that starts with two nine hour days from 9:00 am to 6:00 pm, followed by two days off, two night shifts, and three days off.  Every firefighter has a station partner that can trade time with them.  Most New York firefighters can't afford to live and work in New York so most have a second job.  When you work with a partner firefighter it helps to work different hours to meet each others' needs.  Some work 24 hour shifts while others will trade time to see family sports games, etc.  The only rule is that you can't work more than 24 hours without a nine hour break before the next shift.  Being young, Cody wanted to be where the action was a looked for a transfer to Squad 1 in Brooklyn.  This was one of five squads in the city.  After ponying up a case of beer and a bottle of whiskey, he got transferred the next month.  Cody was one of the youngest members of Squad 1 being in his lower 20's.  Some members of FDNY wait for ten years or more to get a chance to transfer.  Trestrail recounted that many of the members of Squad 1 were getting called up to serve in the military, in addition to retirements, which gave him his chance.

Squad 1 at FDNY looks and runs like Squad 1 at Portland Fire & Rescue.  The FDNY squad is assigned primarily to fires to provide support and safety to firefighters working on the scene.  FDNY Squad 1 responds to about 2,000 runs per year.  While that may not sound like many, they also respond to over 850 working fires per year, making working on the squad the place to be for any firefighter.  FDNY Squad 1 carries six firefighters, as do most rigs at FDNY.  Cody spent four years on Squad 1 and a total of six years at FDNY.

Cody married his wife who he met in Battleground and they had a child.  The young couple felt far away from family and yearned for home.  More commonly, talk around the dinner table began to center around moving back home.  Their cost of living was sky high, the city never slept, and nothing could replace the feel of the northwest.  Cody and his wife decided that New York was not the place for them to raise their family so Cody took a two year leave of absence, came back to the northwest, and took Portland Fire's firefighter exam on which he scored high.

Cody has been a firefighter at Portland Fire & Rescue for four years now and loves being back home.  Now assigned to Station 10, Trestrail hopes someday to get the opportnity to work at a busy East Portland station.  Having had the opportunity to work for the largest fire department in the country, Cody has brought much of what he learned back from his job at FDNY and now lends that experience to many different projects here at PF&R.

If you see him on a call or at the scene of a fire, Cody is not shy about sharing how his dream of becoming a firefighter took him from Battleground volunteer, to New York firefighter, to Portland firefighter.  However, one topic Trestrail is not ready to discuss is September 11, 2001.  He was there that day, and he did go to the scene.  That's where he wants to leave it.

Cody did not leave THE SQUAD, he was thrown out. We tried to break him in and teach him how to "do it", however; we found him unbreakable as well as unteachable. he was terrible with a set of "IRONS' and also our resident Haz-mat geek. He also delayed our responses by very frequently using the rest room. We are glad he left. Good luck with him.

For anybody reading this, this is my follow up to the first comment I made on this article. In my comment, I was breaking Cody's chops, like he will tell you, is a common trait of any FDNY firefighter. The truth is that Cody is still highly regarded and extremely missed in the Squad. He was a squared away firefighter when I worked with him and am sure he still is in Oregon. I was at many fires and technical operation during the years we worked together and he was always an asset and in the right spot to make an impact. Our loss is your gain.