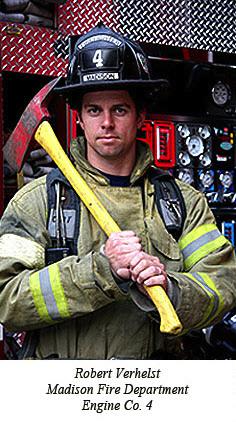 Firefighters all over the country are dedicated to participate in events that honor fallen heroes of September 11, 2001.

Robert Verhelst, a Firefighter for the City of Madison, Wisconsin worked on the Search, Rescue and Recovery team at the World Trade Center for eight days. To honor the fallen of September 11th he will be competing in the 9/11 IRONMAN in Wisconsin scheduled for September 11, 2011.

Representing the CODE 3 FOR A CURE FOUNDATION, Verhelst is the only participant who will be wearing full firefighter turnout gear! Full gear weight over a hundred pounds and includes a helmet, turnout coat, bunker pants, self-contained breathing apparatus, gloves and boots.  The ironman competition will wind through Wisconsin farm land and downtown through the streets of Madison.  The course consists of a 2.4 mile swim, 112 mile bike, and 26.2 mile run.

Although it will be a difficult challenge for Robert, he is compelled to show the true spirit of a firefighter’s heart in his efforts to make a difference in the war against all cancer.

CODE 3 FOR A CURE FOUNDATION honors and remembers firefighters who have died from cancer.  The foundation also grants the wishes of terminally ill firefighters like Kevin Oldham who was diagnosed with pancreatic cancer in April 2010 and passed in March 2011.  Kevin joined the foundation to encourage his fellow firefighters to get early cancer screenings. Click here to view Kevin’s eternal message to firefighters.

Portland Fire & Rescue supports Firefighter Robert Verhelst in the 9/11 IRONMAN Wisconsin. Help CODE 3 CURE FOUNDATION continue to help firefighters and their families by donating at www.active.com/donate/code3foracure . If you donate $1 for every mile Robert swims, bikes, and runs you can receive a commemorative shirt from the event. These donations will not only help the cause but contribute to the foundation for future firefighters.

If you would like more information about this event go to www.code3foracure.org.

That would be quite the task to participate in the Ironman in full turnout gear. One of the hardest things that you would have to deal with would be the weight. I think it is for a really good cause, but it would be really tough as well. Firefighters are pretty in shape as it is, so it may not be that hard. http://store.safe-tonline.com/