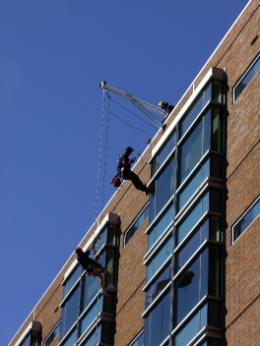 Rescuer enroute to victim; time is of the essence in these types of rescues 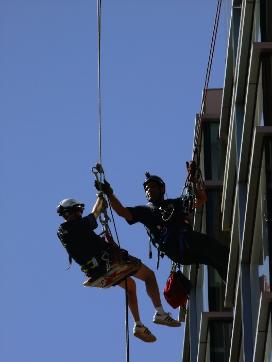 The drill included a simulated rescue of a window washer whose equipment malfunctioned.  The window washer began by rappelling about one story down the side of the six-story building and then tied off, playing the part of a victim awaiting rescue. Portland firefighters took turns being lowered to the window washer, securing to the victim’s harness, removing the washer off his rope system, and lowering him safely to the ground. 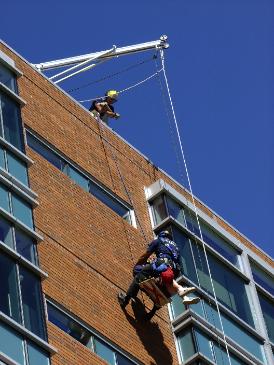 During the drill, firefighters utilized “two points of contact” in their system. This means that the rescuer and patient are always attached to the system by two ropes, a mainline and a safety line, that are part of a system. The mainline is the working rope that is used to do all the work. The belay (safety) line is attached to a separate anchor and a different point on the rescuer and patient on their harness. In the event of a failure of the mainline, the belay (safety) line is always there to catch the load. This type of redundant system is essential in maintaining a sufficient safety factor for not only the firefighters but also those being rescued. 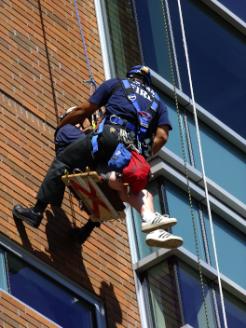 Rescuer performs an assessment of the victim upon initial contact 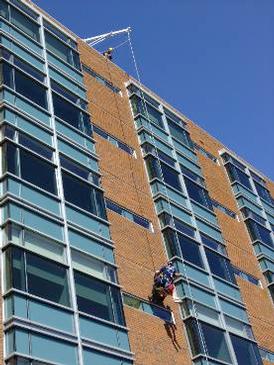 The simulated rescue went smoothly.  The close to 40 firefighters involved in the rescue drill are members of Portland Fire & Rescue’s Technical Rescue Team. These members are trained in high angle rope rescue and are skilled in the use of ropes and other rigging gear to use in high angle rescue scenarios. 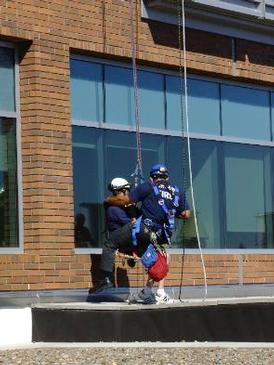 According to Station 1 Lieutenant Jamie Ziegler, “Our firefighters frequently practice rope rescue skills and this drill was a great way to prepare for a complicated rescue.”