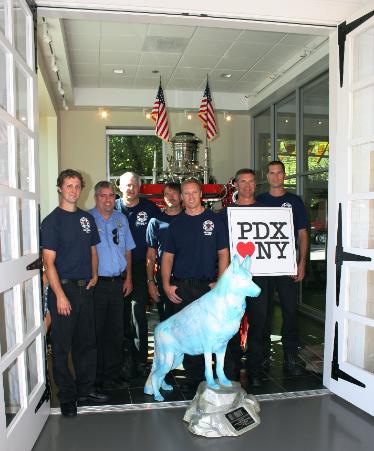 Until today, Portland Fire & Rescue's arson canine - Lila the Labrador - was the only canine crew member residing at Downtown Portland Fire Station 1.  Today, she was joined by a full-sized statue of a German Shepherd that was created to pay tribute to search and rescue canines and their handlers who came to service in the rescue and relief efforts of September 11, 2001. 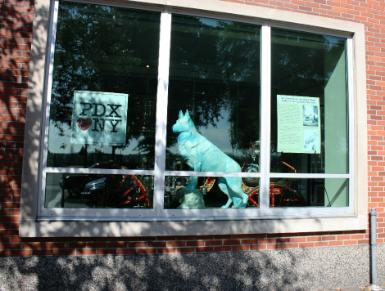 The public is invited to view the statue - named "Above and Beyond" - which is part of the DOGNY public art exhibit and fundraiser that brought together world famous artists to paint life-sized German Shepherd dogs following the 9/11 attacks on the World Trade Center. 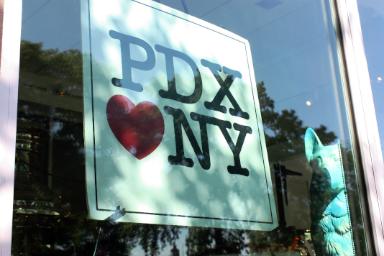 Painted a brilliant sky blue with white wings, "Above and Beyond" is now on display in the southeast windows of Portland Fire Station 1 located at 55 SW Ash Street through the end of the year.  This is the only statue to come to Oregon and was purchased through the collective efforts of the three American Kennel Club Member Clubs of the Rose City.

"Portland Fire & Rescue is honored to have been chosen by the American Kennel Club to display Oregon's tribute statue," said Public Information Officer Paul Corah.  "Canines and their handlers perform difficult and dangerous jobs for our nation's citizens every day and deserve our recognition and appreciation."

DOGNY, America's tribute to search and rescue dogs, is an American Kennel Club program whose goal is to raise much needed financial resources for professional and volunteer canine search and rescue organizations throughout the United States.

The statues were initially sponsored by corporations, communities, and individuals and displayed for three months on the streets of New York City.  After the public display, the statues were auctioned at Sotheby's in Manhattan to raise funds for DOGNY.