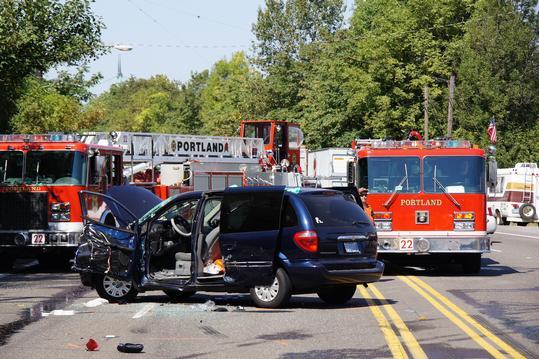 At 9:39 am, firefighters from North Portland Fire Stations 6 and 22 were dispatched to reports of a head-on collision between a semi-truck and a car on Highway 30 just underneath the St. Johns Bridge.

Upon arrival, firefighters encountered three accident victims. The driver of the semi-truck was uninjured. However, two individuals in the car had to be extricated using the Jaws of Life. One individual was pronounced dead at the scene. A second individual was extricated from the vehicle by firefighters and transported to an area hospital.

The accident caused Highway 30 to be closed in both directions and there was a significant traffic back up. About 1/4 miles south of the St. Johns Bridge, a second accident took place on Highway 30 while firefighters and police were on scene of the earlier accident.

At 12:36 pm, reports indicate that a minivan attempted to turn from the northbound lanes of Highway 30 where traffic was backed up, into the southbound lanes to go the opposite direction. Reports further indicate that the van collided with a large tow truck that was on its way to tow the semi-truck from the first accident.

Firefighters from Stations 6 and 22 responded to the second accident and extricated two individuals from the mini-van using the Jaws of Life. Both individuals were transported to area hospitals. The tow truck driver was not injured.

"This double accident is an important reminder to drivers to be vigilant whether traffic is stopped or moving," said Portland Fire & Rescue Public Information Officer Paul Corah. "It appears that this situation was avoidable and that a single accident turned into a double accident on Highway 30 today."