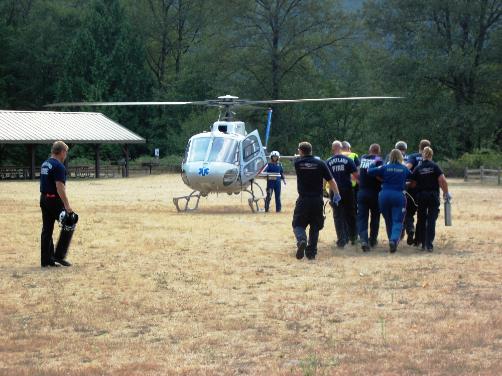 At 3:15 pm a 9-1-1 call was received reporting that a man had slipped below the surface of the Sandy River at the boat dock at Oxbow Park in Gresham. Gresham Fire & Emergency Services quickly responded to the park and deployed a rescue swimmer into the river to search for the individual. The rescue swimmer was unable to locate the man, and a joint dive rescue operation was initiated with dive team members from Portland and Gresham Fire.

After the dive team entered the water at 3:47 pm, the man was located approximately three minutes later and taken to shore where Gresham Firefighter/Paramedics began CPR. Although the man had been under water for 30 minutes, a weak heart rhythm was established and the victim was transferred to a Life Flight helicopter and flown to Emanuel Hospital. Despite the efforts of medical personnel to save him, the 21-year-old male died a short time after arriving at the hospital.

Reports indicate that the man was with a group of friends who had just left a day of college classes for a swim in the Sandy River on a hot, summer afternoon. This is the fourth drowning in the Portland Metro Area in four days. Both Gresham and Portland Fire urge citizens to use caution and never underestimate your swimming abilities around swimming pools and bodies of water.