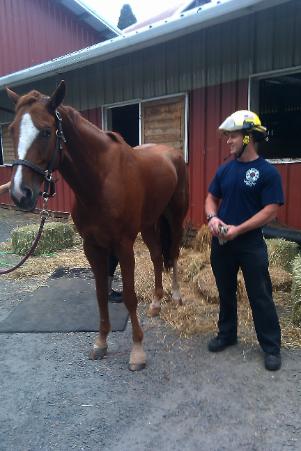 Today at 8:33 am, firefighters from SW Portland's Station 27 were dispatched to a request for assistance with a horse that was stuck halfway out of his stable window at 6330 NW Skyline Blvd. Upon arrival, firefighters found the horse - named Sky - with his hind legs stuck through a stable window. The horse's owners had been working to free him unsuccessfully for about 45 minutes. By the time firefighters arrived, the horse was visibly shaking. 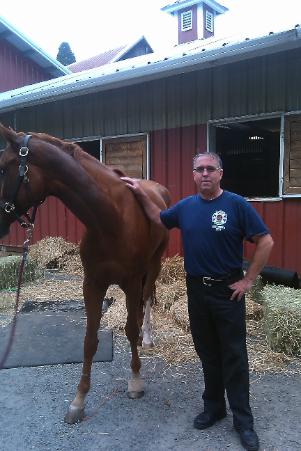 By this time, the horse had been sedated to calm him while firefighters went to work to cut around the horse with a circular saw to free him. However, despite sedation, the horse was terrified of the noisy saw and firefighters quickly realized they needed to find another way to rescue him. The horse's owners assured firefighters that he would not kick while under sedation.

"All four of us got behind the horse and made sure we were careful around his rear legs. Then, with a little maneuvering and a lot of muscle, we lifted him out of the window," said Lieutenant/Paramedic Mike Pringle.

Sky escaped his ordeal with just some minor cuts and bleeding that resulted from the screws in the window sill. Other than minor injuries, and with some extra love and attention from his owners, Sky will be just fine.