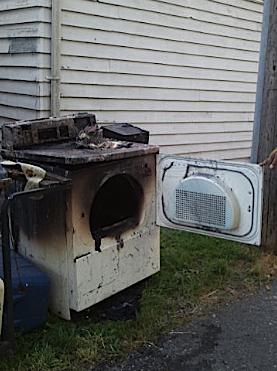 Last week, a residential fire in SW Portland caused over $20,000 in damage. The fire was determined to be caused by a build-up of lint in the dryer vent.  Thankfully, the quick actions of firefighters prevented the house fire from spreading to nearby home and causing further damage.

Clothes dryer fires are one of the most common causes of house fires. The National Fire Protection Administration (NFPA) estimates between 2003 and 2006, one out of every 23 home fires was caused by the dryers or washing machines. In 2006, the NFPA estimated firefighters responded to 17,700 fires caused by the household appliances.

The leading cause of these fires according to NFPA is failure to clean the lint from the dryer. The NFPA recommends regular cleaning of the lint vents, making sure the air exhaust vent pipe and outdoor vent flap are not restricted.

A few simple safety tips you can help prevent a clothes dryer fire:

I UES TO WORK FOR GOVERMENT HOUSING, I HAD TO INNSTALL DRYER IN THE ELDERY TENNETS'S APPERTMENT.
SENCE I COULD NOT VENT THE DRYER THROUGH THE
WALL I WENT TO A LOCAL HARDWARE STORE, THEY GAVE
ME SOMETHING THAT FIT BEHIND THE DRYER THAT DID
NOT HAVE TO BE INSTALLED IN THE WALL, IT WAS MOUNTED ON THE WALL AND DID NOT COME UP ABOVE
THE DRYER, IT HAD A WATER CONTAINER AT THE TOP
THAT WAS USED TO CATCH THE LINT FROM THE DRYER.
DO YOU KNOW WHAT II AM TALKING ABOUT,PLEASE REPLY, THANKS.

These stories are far to common, yet quite preventable. New products like the LintAlert (www.lintalert.com) actually help prevent dryer fires by letting homeowners monitor how safe and efficient their dryer is venting.

I had a dryer fire this weekend. Thank you for posting this because my laundry is an internal room so my dryer vents into a pipe that runs through a wall, into my garage, and out the other side, so I'm going to need to use your technique to do a good cleaning like this.

I had a dryer fire this weekend. Thank you for posting this because my laundry is an internal room so my dryer vents into a pipe that runs through a wall, into my garage, and out the other side, so I'm going to need to use your technique to do a good cleaning like this.

The more lint that a dryer vent collects, the less efficiently the dryer will run. Sure, it will still get the job done, but it will take much more energy in order to do so.

But it's not only wasting energy. It will take more time as well. In fact, in some cases, it could prevent clothes or bedding from being dried fully in a single cycle. This may force you to monitor your dryer carefully and run it in quick succession—for if you fail to do so, your clothes and bedding may take on a musty odor and dingy appearance.

Don't want to monitor your dryer for several hours straight? No problem. Just have your dryer vent cleaned instead, and you'll be able to forget about your wash load until the end of the day.

Have <a href="https://dryerventcleaningraleigh.com"> clean dryer vent services </a>

Make sure to have your dryer vent cleaned annually.