ALL INVITED TO JOIN FIREFIGHTERS FOR A 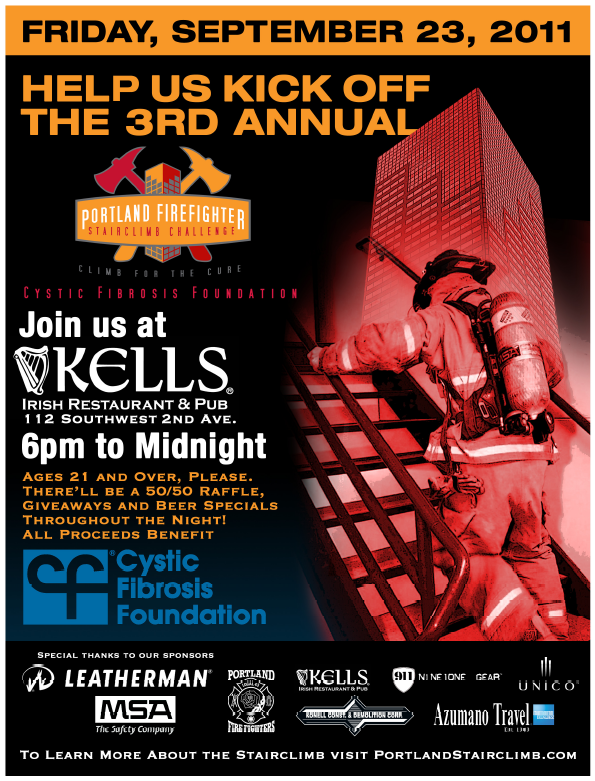 Sunday, September 25, 2011, firefighters from Portland and the entire state will join with firefighters from Washington, California, and as far away as Florida, Tennessee, Colorado and Montana to compete in the 3rd annual Portland Firefighter Stairclimb Challenge.

During the stairclimb, 500 firefighters will race up 40 floors or 800 steps of the U.S. Bancorp Tower in downtown Portland in over 70 pounds of full firefighting gear. Each firefighter is climbing to raise awareness and funds in the battle against Cystic Fibrosis (CF). Last year, the event alone raised more than $75,000 that was donated directly to the Oregon Chapter of Cystic Fibrosis.

Although the Portland Firefighter Stairclimb is open only to firefighters, the public can help several different ways.

On Friday, September 23, 2011 beginning at 6:00 pm, a Kick-Off party for the stairclimb will be held at Kells Irish Restaurant & Pub located at 112 SW 2nd Avenue.  All are invited to attend and take part in a 50/50 raffle, giveaways, and beverage specials throughout the night.  All proceeds will benefit the CF Foundation.  The public can also support the stairclimb's mission through donations. Click here to make a donation that will support the mission of the CF Foundation and help keep pace with current commitments to vital cystic fibrosis research and care.

All are welcome at the Kick-Off Party and Stairclimb!