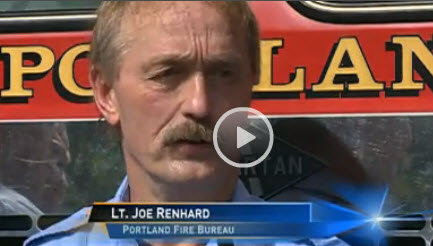 Portland Fire & Rescue responded to reports of a pin-in vehicle accident at 1:49 am. Firefighters from North Portland Stations 6, 8, and 22 responded to the scene at 13225 N. Lombard.

Upon arrival, firefighters found that three individuals had been ejected from a pick-up truck in the accident. Two individuals were found in a nearby field. A third was found pinned underneath the truck, which had landed on its side on the road. What firefighters did next surprised even the fire chief on scene.

"I was impressed to watch our firefighters collectively circle the overturned truck and lift it off the man pinned underneath," said Battalion Chief Terry Munro. "Even though we carry lots of specialized equipment, strength turned out to be the quickest and most efficient way to rescue him."

Portland Firefighter/Paramedics worked to stabilize the patients at the scene and multiple ambulances and Life Flight were activated to respond. All three patients were transported to Emanuel Hospital. The two individuals found in the field had non-life threatening injuries. The man pinned underneath the truck sustained life threatening injuries. Portland Police Bureau is on scene investigating the cause of the accident.

Absolutely Incredible!:) You guys are Amazing!:)