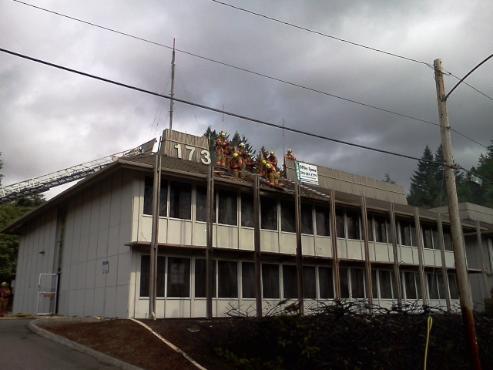 At 10:22 am, Portland Fire & Rescue received reports of shrubs on fire in front of a two-story commercial office building at 1730 SW Skyline Blvd.  Firefighters from SW Portland’s Station 16, which is located just across the street from the fire near the Highway 26/Sylvan exit, were first on scene.

“When we first arrived, we saw brush on fire in front of the building,” said Lieutenant Jason Kelly.  “The wall of flames was as high as the second-story eaves of the building.  The wind kicked up and just pushed the flames directly uphill and into the south side of the building.”

A second alarm was called for by the incident commander at 10:31 am bringing additional resources to fight the fire.  When the flames pushed into the building, windows began to blow out and the fire raced up under the eaves, extended into the attic, and broke out onto the second floor.

Original reports indicated that the building was empty.  After a primary search, firefighters confirmed this.  Firefighters initially knocked down the flames from the outside and then made an aggressive attack on the interior fire.  Crews climbed onto the roof to cut vent holes and open the roof to release the heat and smoke that had built up there.

Crews had to be extra careful because it the building has a ceramic tile roof, which is very heavy.  Because there was so much weight and structural members could have been weakened by the fire, firefighters had to use extra precautions on the roof while cutting holes and attacking the fire.

The cause of the fire is unknown at this time, but investigators have released that the fire originated in the shrubs outside the building.  Approximately one-third of the building is a total loss, and damage is currently estimated at $250,000.  Approximately 50 firefighters responded to fight the fire.

Updates will be provided as they become available.