UPDATED INFORMATION, PHOTOS, AND FIRE CAUSE 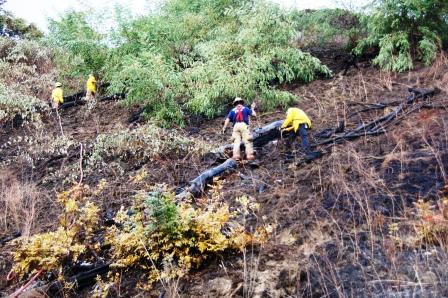 At 4:21 pm, Portland Fire & Rescue responded to reports of smoke rolling up and over homes along North Willamette Blvd. just north of the University of Portland.  Upon arrival, first responding firefighters discovered a wildfire that apparently originated near 5924 North Willamette Lane creeping up the bluff from the bottom of the hill toward homes. 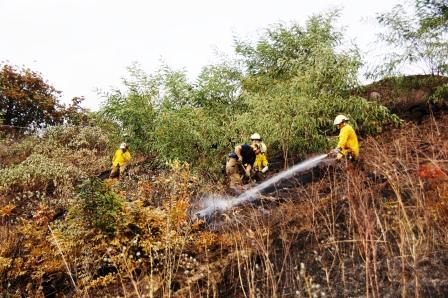 Incident commanders called for a 2nd alarm response bringing a total of 60 firefighters and additional resources to the scene to fight this blaze at around 4:30 pm.

The fire, which spanned approximately 100 yards in length, originated at the bottom of the bluff.  Firefighters at the top of the bluff began pulling hose lines and undertaking structural protection tactics to save homes, while firefighters at the bottom of the bluff began aggressively attacking the wildfire using wildland firefighting equipment and tactics.  Firefighters were able to contain the fire to one acre in size with the use of 1  3/4-inch hose lines that they used by hand to control the blaze. 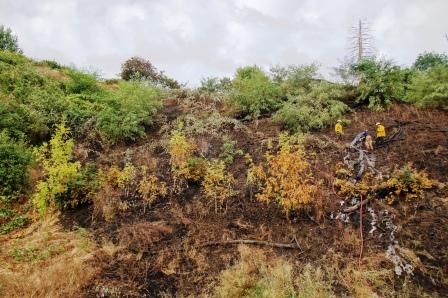 Once the fire was brought under control at approximately 4:51 pm, firefighters began mopping up the fire zone.  They doused the entire affected fire area with foam using 1-inch hose lines to ensure that there are no flare ups and are maintaining a fire watch over the area.  The aggressive firefighting tactics resulted in firefighters stopping the wildfire at the fence lines of several backyards.  No structures sustained damage in the fire.

"This fire took place in the same location as the Willamette Bluff fire of 2001," said Public Information Officer Anthony Schaffer.  "In fact, a tree in the back yard of one of the threatened homes was still charred from the previous fire."

Fire Investigators have just released that this fire was caused by a child playing with matches.  Portland Fire & Rescue urges citizens to keep matches and lighters away from children, preferably in a locked cabinet, and to teach children at an early age about fire danger.

A 2nd alarm has been called for by the incident commander.

A Public Information Officer is responding to the scene.  Media staging will be one block north of Willamette Blvd. on N. McKenna.

Updates will be provided as they become available.