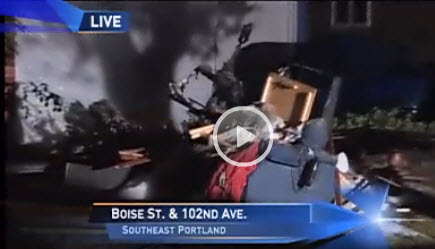 Portland Fire and Rescue responded to a house fire tonight at 10225 SE Boise Street and arrived to find flames coming out of the front living room windows. The firefighters were dispatched at 10:55 pm and arrived four minutes later at 10:59 pm.  The firefighters also found two women, with a neighbor's garden hose and fire extinguisher, battling the blaze from the front yard of the one story home.  Firefighters stated that these two women had kept the fire contained to the living room, which reduced the amount of damage to the home.  Firefighters quickly entered the house and extinguished the fire.  The fire was under control at 11:06 pm.

Two citizens were injured. One male resident was injured due to smoke inhalation and transported to Portland Adventist Hospital. The female neighbor who had helped battle the fire also was injured. She took herself to the hospital with a minor injury.

The cause of the fire has been determined accidental. A lamp was accidentally knocked over and the lamp ignited the curtains in the living room.

The three residents will be displaced tonight and are staying with friends. The value and loss to the home is still being determined.

Portland Fire and Rescue encourages all citizens to keep a fire extinguisher easily accessible within their homes.  This Oregon State Fire Marshal's website helps you perform a "Quick Check" of your extinguishers: www.oregon.gov/OSP/SFM/docs/Licensing_permits/cardlock/Cardlock2007/Cdfm440_QuickChckFireExt.pdf?ga=t