Portland Fire Investigators have determined that the 2-alarm apartment fire on October 6, 2011 at 4605NE Killingsworthwas accidental.  The fire was caused by an unattended pan left on top of a stove in a ground floor unit that caught fire and spread to surrounding units.  This fire resulted in the death of one tenant in an upstairs unit, and required two other tenants to jump from upper story windows to escape the fire.

Investigators have also determined that the fire caused approximately $250,000 damage to the apartment building. 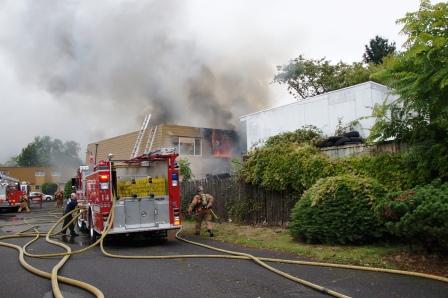 At 10:49 am, Portland Fire & Rescue responded to reports of heavy flame and smoke billowing from a ground floor apartment unit at 4605NE Killingsworth- the Normandy Apartments.  When crews arrived, they found that the open stairwell leading to four units was fully involved in flames. 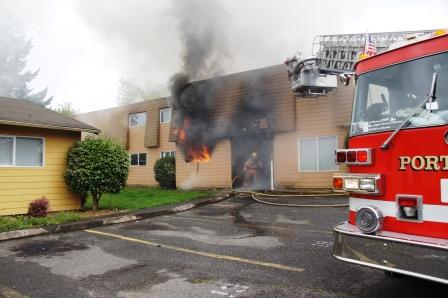 Public Information Officer Anthony Schaffer arrived on the scene shortly after the fire broke out.  "I noticed two victims that had jumped from the second story sitting on the curb with obvious injuries.  We directed resources immediately to attend to the victims and called for a second alarm on this fire.  The number one priority on any fire is life safety." 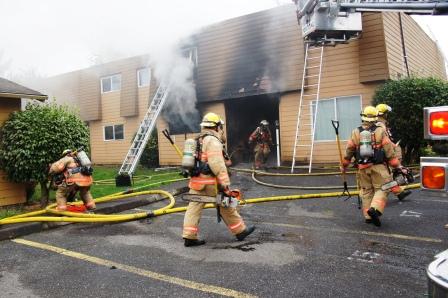 Due to the severity of the incident, commanders called for a 2nd alarm at 11:01 am.  Firefighters extinguished the flames in the stairwell and made entry into the second story units.  While performing a search of the second floor, firefighters encountered a fire victim who was deceased.  The flames continued in intensity and firefighters engaged in aggressive suppression operations. 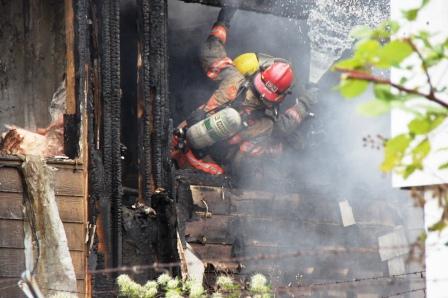 Additional firefighters and resources arrived.  Firefighters aggressively attacked the fire, which was engulfing three of the four units.  The fire was brought under control and recalled at 11:42 am.  Firefighters remain on scene with Fire Investigators working to extinguish hot spots and investigate the fire's cause.  The Oregon Chapter of the American Red Cross has been called in to assist with finding alternate housing for the individuals impacted by the fire.  Approximately 50 firefighters responded.

Firefighters on scene assessed and treated the victims.  Both were transported toEmanuelHospitalwith non-life threatening injuries.

Firefighters were able to quickly access the fire units and respond because fire lanes were kept clear for fire apparatus and personnel.

Portland Fire & Rescue is responding to a 2nd alarm apartment fire at 4609 NE Killingsworth - the Normandy Apartments. Media staging will be at NE 46th & NE Killingsworth. A Public Information Officer is on scene.