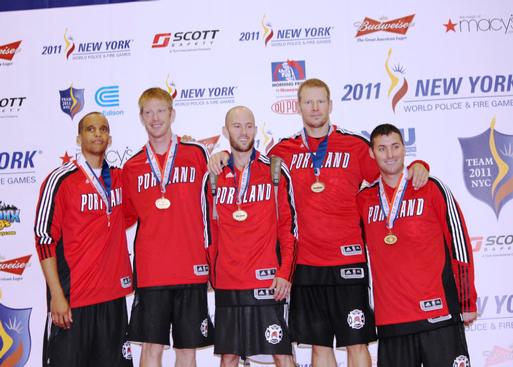 The World Police & Fire Games, currently the second largest multi-sport event in the world surpassed only by the Summer Olympics, took place inNew York Cityfrom August 26 through September 5.  Nearly 20,000 full time firefighters and law enforcement personnel from 70 different countries descended on the city that never sleeps to compete in 69 sports.

Among those were Portland Fire Station 8 Firefighters Joel Wilks, Rashaan Clark, Aaron House, Jeff Tacheny, and Trevor Woods, who competed in the Men's 3 on 3 Basketball Tournament.  The team's opponents haled fromBarcelona,Hong Kongand NYFD.  Firefighter Joel Wilks recounts that they won each game by 15 - 25 points until they faced off in the championship gold medal game with an NYFD team fromHarlem.  The game was extremely close with PF&R achieving two key defensive stops on their last possession to secure the victory and win the gold medal.

Making the victory that much more special was the fact that the eleven days of sports competition and specially planned events in this year's games respectfully coincided with the ten year remembrance of September 11, 2001.

Portland Fire & Rescue is proud of our team's victory!

You can read more about the World Police & Fire Games and view results of the competition at:  http://2011wpfg.org/.