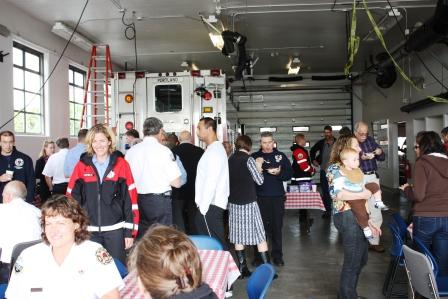 Crockpots bubbled with fresh chili while firefighters and staff of PortlandFire & Rescue excitedly filled the apparatus bay of Station 23 this afternoon during lunch for the 2nd Annual Fire Marshal’s Office (FMO) Chili Cook-Off. The goals of the chili cook-off were simple - to gather employees, encourage camaraderie and interaction, share recipes, enjoy great food, and donate proceeds raised to a chosen charity. 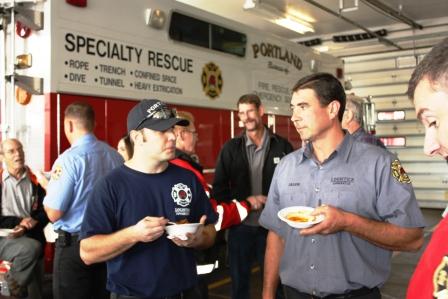 With cups and spoons in hand, all were encouraged to taste each of the chili masterpieces prepared by members of the FMO and vote using dollars and change. PF&R’s FMO, also known as the Prevention Division, is responsible for all fire and life safety related programs and is managed by Fire Marshal Erin Janssens. 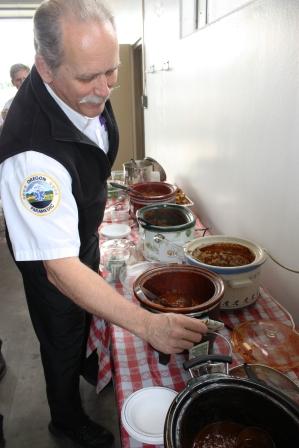 The “People’s Choice” winning chili belonged to Firefighter Brian Dundan. Firefighter Dundan received the largest number of cash votes from fellow firefighters and will donate all proceeds raised to the the Children's Cancer Association.

The “Chef’s Choice” winning chili was created by Fire Inspector Specialist Jeff Herman.  This honor was awarded by Oswaldo Bibiano, Owner and Executive Chef of Portland’s own ‘Autentica’ restaurant after he tasted Fire Inspector Herman’s chili. Herman will receive a $50 gift certificate towards a meal at Autentica.

Great job to all!