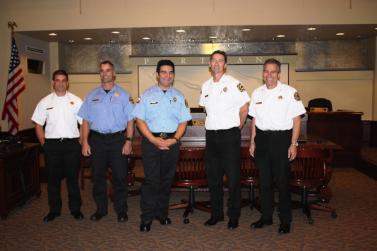 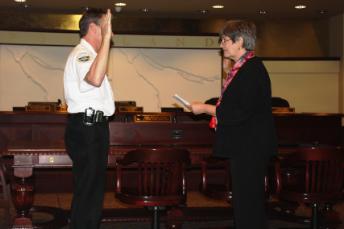 Glen Eisner is Portland Fire & Rescue’s (PF&R) newest Division Chief.  Eisner began his career at Portland Fire in 1976. For the past 34 years, he has risen through the ranks at PF&R as a Firefighter, Lieutenant, Captain, Battalion Chief, and has served over five years as a Deputy Chief. In 2010, Eisner was awarded “Firefighter of the Year” by the American Legion, Post No. 1. 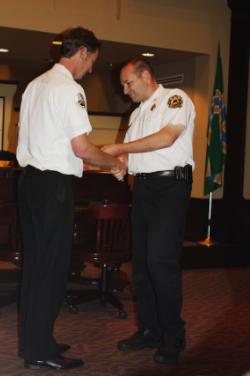 Duane Bray is now one of three Deputy Chiefs that plans, organizes, integrates, and directs the activities of one of three shifts in PF&R’s Emergency Operations Division. Hired in 1982, Bray brings experience to his new position as a fire lieutenant, captain, and battalion chief. Most recently, Bray served as PF&R’s Safety Chief, responsible for fostering a safe and accident-free workplace. 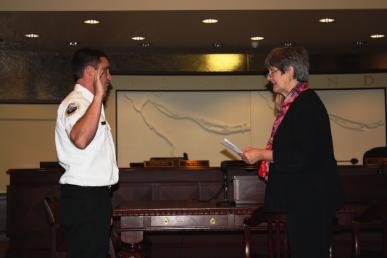 After close to 17 years of service here at Portland Fire, Dan Buckner was awarded the rank of Battalion Chief. Under the direction of a deputy fire chief, a battalion chief has command responsibility for all fire, rescue, and emergency medical service activities within one of the four battalions (specific geographic regions) within the City of Portland. Previously, Buckner served as Station 1’s Captain. 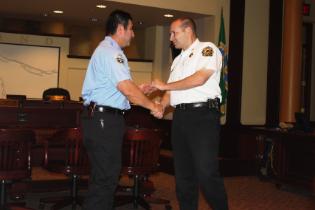 Greg Espinosa has worked at fire stations across the City of Portland for close to 17 years and is currently stationed in the downtown area. Espinosa is a dive team member as well as one of Portland Fire’s Peer Fitness Trainers. As a Station Captain, Espinosa will be the administrative officer and in direct command over firefighting personnel at an assigned station. 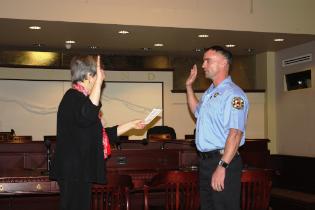 Harbor Pilot Mount is sworn in as his family watches proudly from the audience.

Sage Mount was hired at Portland Fire in 1998.  To become a Harbor Pilot, Mount worked diligently to become a Certified Fire Boat Pilot on all Fire Bureau Vessels. Mount know has considerable knowledge of methods and devices used in navigating and piloting a boat as well as harbor regulations, federal, and other laws and regulations affecting boat operation and navigation.