**UPDATED WITH FIRE CAUSE & DAMAGE ESTIMATE**

Fire investigators have determined that the cause of this morning's fire inNE Portlandwas caused by careless smoking. The total damage is estimated at $50,000.

Fire Investigators have determined that this morning’s fire in SE Portland was caused by a youth-occupant with an open flame heat source. Total damage is estimated at $65,000.

Portland Fire reminds citizens that it is not uncommon for children to misuse fire. Without the right knowledge, kids can make errors that can lead to tragic results.

Consider the following to address firesetting behavior in kids:

Need Help? – If you need help or have questions about this behavior, contact the Youth Firesetting Intervention Program at Portland Fire & Rescue.  You can reach a specialist at 503-823-3700. 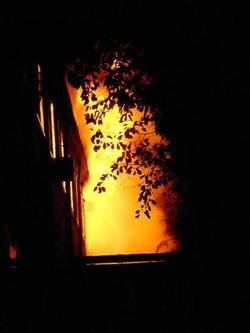 Portland firefighters responded to reports of smoke and flames coming from an apartment building at 13746 SE Powell Blvd. (The Shalamar Apartments). When firefighters arrived at 1:32 am, they encountered flames pouring from a ground floor apartment unit that had spread to the second story and attic. Due to the fire's size and extension to the apartment building's attic space, the Incident Commander called for a second alarm at 1:45 am bringing additional firefighters and equipment to the scene to attack the blaze. 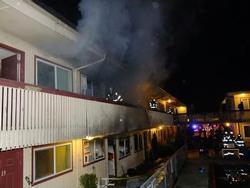 While ladder truck crews advanced to the roof to attack the fire and open the roof to release heat and smoke, engine crews aggressively advanced on the blaze from the ground and searched each unit to make sure all occupants had safely escaped.

"Apartment fires in the early morning hours are always of particular concern to firefighters because we know people are home and likely sleeping," said Public Information Officer Anthony Schaffer. "Fortunately everyone escaped this fire safely."

The fire was brought under control at 1:59 am. A total of three apartment units sustained fire damage. Four individuals - two males, one female, and a 5-year old male - as well as two cats were displaced from their apartment. The Red Cross has been called to assist the family with finding alternate housing. Additional reports indicate that a 3-year-old child suffered smoke inhalation from the fire. The child was treated at the scene by Portland firefighter/paramedics and did not necessitate transport to a hospital.

Firefighters will remain on scene throughout the morning to monitor for hot spots. Fire Investigators are also on scene working to determine the cause of the fire and damages.

With two small children involved in this morning's fire, it's an important reminder to plan and practice a fire escape plan with your family. Know two ways out of every room, make sure doors and windows are clear and easy to open, and have a safe meeting place outside where firefighters can easily locate you. Practice your plan at least twice a year - in the day and night. The Oregon State Fire Marshal's Office offers a helpful escape plan map you can download and customize at: http://www.oregon.gov/OSP/SFM/docs/Escape.pdf.